In a prior piece about how Florida should score more points under Dan Mullen, I made a comment that Florida fans would “rather see their team on average win 38-28 rather than 24-14”. I should know; I am one such fan.

Now, it is possible to end up with actual win totals that are substantially higher or lower than what Pythagorean expectation predicts. In the stat world, that difference is generally chalked up to good or bad luck.

In 2017, Florida had its worst defensive showing in decades. The team allowed 27.3 points per game, not so far off from that hypothetical 38-28 average. A big problem, of course, is that the team only scored 22.1 points per game, more than two touchdowns away from what would’ve been needed to expect even eight wins.

Thus, scoring more points in Mullen’s offense is not the only pressing concern. Todd Grantham must revamp the defense so it gives up a lot fewer points.

Just how many fewer it needs to give up is a question that can be answered by asking how many points you think the offense will score and what kind of win percentage you’d like to see. This is where the Pythagorean expectation formula will help out.

For instance, I suspect Florida will have a hard time averaging more than about 28 points per game in 2018. It takes time to install a spread scheme after a pro-set, and UF will either go with a guy who doesn’t really fit the system or Mullen’s first-ever freshman starter at quarterback. The Gators averaged 28.6 with a junior Chris Leak at quarterback in Mullen’s first year in 2005, after all, so we’ll say the 2018 Gators score an optimistic 28 points per game for now.

After getting just four wins this past year, though it’d be five without the Northern Colorado cancelation, I think getting back to eight wins would be a nice debut campaign for Mullen. Without needing good luck — or suffering bad luck — Pythagorean expectation says the Gators can allow up to 21 points per game to have a projection of at least eight wins. The average can go as high as 22.7 if you’re willing to round an expectation of 7.5 wins up to eight.

The good news is that since Steve Spurrier took over in 1990, only two UF teams have allowed more than 22.7 points per game: 2017 and 2007, which allowed 25.5. Both were teams playing tons of youth on defense, especially in the secondary. With promising players like Marco Wilson and C.J. Henderson a year older and wiser, the 2018 defense figures to get a lot better.

Most of Grantham’s college defenses have been under the 22.7 points per game allowed threshold as well. Four of his five SEC defenses between his four years at Georgia and one at Mississippi State came in under than mark, with the exception being 2013 at UGA. If Mullen can get the team to score four touchdowns per game, then winning eight games next year is well within reason.

Next year is one thing, but I know Florida fans hope Mullen brings the program back to a championship level. These days, “championship level” means going at least 11-1 in the regular season. That record doesn’t necessarily get a team even a division title; just ask Will Muschamp’s 2012 Gators. However, 11-1 is the necessary, if not perfectly sufficient, threshold to be in the running for championships.

I used Pythagorean expectation to figure out what a championship-level offense and defense combination would be given the target of projecting to 11 wins. I capped things with eight points per game allowed on the low end and 53 points per game scored on the high end because those are about the limits nationally in the seasons since 2008.

Here are the results. For the points per game allowed on the X-axis, the Y-axis tells you how many points per game the team needs to score to get an expectation of 11 wins. 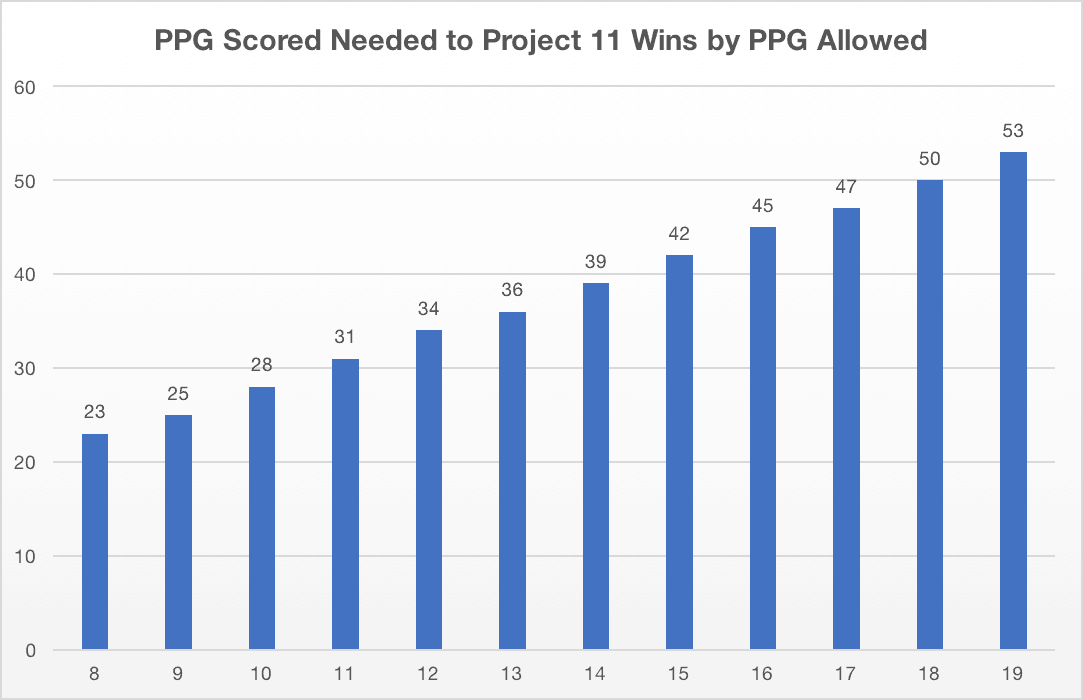 Using the chart, a Florida team at Mullen’s past upper limit of 43.3 points per game would need a defense capable of holding opponents to no more than just over 15 points per game to make a championship-worthy team (without needing good luck). If the Gators could manage to match Spurrier’s record, they’ll need to allow a little under 17 points per game.

Here is where it starts to get uncomfortable looking at Grantham’s past record. The fewest points per game allowed by a college team he’s been with was 19.6 by 2012 Georgia. A team averaging 43.3 points per game scored (again, Mullen’s high water mark) and 19.6 per game allowed gets an expectation of 10.4 wins in a 12-game season. UF would need some mild good luck to get to 11 wins and a lot of good luck to go 12-0.

Of course, winning championships often requires some good luck here and there. Only two teams since World War II (and possibly many years before that) have won every game by at least 14 points: 1995 Nebraska and 2004 Utah. It’s basically impossible to leave no doubt in every single game.

That 2012 Georgia team with Grantham’s best scoring defense came five yards away from winning the SEC Championship Game and going to the BCS title game. Given how Notre Dame imploded against Alabama that year, that means it was probably five yards away from winning the national title. Grantham’s defense was sufficient to put the team on the precipice of winning it all; it just needed a slight bit more good luck to get there.

When the Gators have won their national titles, though, they’ve usually been right on with Pythagorean expectation. The 1996 team that went 12-1 projected to win 11.9 games. The 2008 team that went 13-1 had a projection of 13.3 wins. Only the 2006 team had to get a bit fortunate with a 13-1 record and 12.1 projected wins. Most national champions are within a win or so of their projections, with a few scattered exceptions like the tremendously fortunate 2010 Auburn team that went 14-0 with a projection of 10.9 wins. You have to be good because you can’t count on being lucky.

That’s where the bar will be. Grantham’s stingiest defenses allowed around a field goal per game more than what the 1996 Florida team did and about a touchdown per game more than Meyer’s title-winning teams did. While non-offensive points and field position variance caused by offense and special teams factor into the number of points per game a team allows, the vast majority of those points are on the defense.

If Florida is going to win a national title without needing a healthy dose of good luck, Grantham will have to coordinate the best defenses of the college phase of his career.