Florida is in a bit of an unusual place with both National Signing Days in the rearview mirror. The 2020 class isn’t set in stone yet. In fact, you can’t even find agreement about how many players there are in the 2020 class among the major recruiting services.

It’s therefore more of a challenge than normal to evaluate the Gators’ haul immediately after the February signing day, but I’ve got it covered here for you.

The Gators have two verbal commits in safety Marc Britt and wide receiver Leonard Manuel. Britt plans to sign on February 20, while Manuel says he will do so on April 1. The 247 Sports Composite counts signees and commitments, so that’s why it has 25 players in the class. Both could end up signing elsewhere, so they’re not complete locks as Gators.

I don’t subscribe to ESPN’s recruiting coverage, so it won’t even let me look at its class list for UF. However, I believe it’s counting signed recruits and transfers. The 23 signees plus four transfers — Brenton Cox, Lorenzo Lingard, Jordan Pouncey, and Justin Shorter — makes 27.

The transfer issue muddies the waters a bit, and we may see a redefinition of recruiting classes in the near future.

It used to be that transfers were considered wholly separate from recruiting. Classes were composed of only high school signees and JUCO transfers, full stop. With the transfer portal making it easier and more open for coaches to contact and, in a way, recruit potential transfers, that separation in definitions may go away. Dan Mullen blurred the line in his post-NSD press conference yesterday, saying he saw Lingard as the running back for the 2020 class.

For now, I still consider transfers separate from recruiting classes. Everything below will not consider Cox, Lingard, Pouncey, or Shorter as part of the 2020 class.

During the offseason before the 2018 season, Mullen answered a question by giving guidelines for how many players at each position he ideally would like to sign every year. If you do the math on it, it’s clear these are baselines because the targets add up to 17-21 players per class. Florida will be signing more than the high end of that range in most years.

Here is how the 2020 class stacks up against the targets Mullen named. The ranges at wide receiver and safety reflect the uncertain status of Britt and Manuel.

The only two spots that missed the target were running back and linebacker. Mullen may have named Lingard as the running back for this class, but recruiting coverage at this site and others reported that Florida was pursuing running back recruits into this week. The former 5-star Miami transfer soothes the blow of coming up empty, but UF did miss on every high school back it recruited.

Linebacker is more of a straightforward case of being stacked at the position. UF loaded up on linebackers in the 2019 class, and it has a good number of non-senior veterans.

Meanwhile, the Gators exceeded the baseline targets at offensive line, defensive line, and especially the secondary.

Last year proved UF can’t bring in too many good prospects on the offensive line. The defensive line has only three returning underclassmen, none of whom have played a significant number of snaps, to go with its three seniors and two juniors. The defensive backfield is even more unbalanced by class with five seniors and two juniors — one of them, Marco Wilson, likely to go pro after this year — against just three underclassmen.

As you’d expect, Mullen went above his targets in the areas of most need.

Bud Elliott of SB Nation/Banner Society developed the Blue-Chip Ratio as a way to use recruiting to tell if a team is a real national title contender or not. As he notes it takes more than signing at least 50% 4-star and 5-star recruits over a four-year period to take home the golden scallion, but it is a hurdle a program must clear to have a shot.

Mullen has increasingly cleared the 50% mark with his classes so far if you look at the main Composite team ranking pages.

These numbers don’t completely reflect reality, though. Both the 2018 class (two of 20) and 2019 class (six of 25) had players included in that table who didn’t even make it to fall practice due to not qualifying for school, transfer, dismissal, or medical issues. The 2020 numbers also include the pair of unsigned commitments.

Factoring out the 2018-19 early departures and 2020 verbals, this is a more accurate look, pending whatever happens in the current offseason.

The 2019 class takes a real dip, but it still was above the 50% blue chip line. The present class is the best yet, and the percentage goes up to 77.3% if you factor out punter Jeremy Crawshaw. Kickers and punters generally top out at the mid 3-star range, and only a handful end up above 2-star. Crawshaw is the ninth-rated punter in the 2020 class, but he still rates as merely a high 2-star.

Mullen finally got Florida its first 5-star signee since 2015 in DT Gervon Dexter, but the bigger story was a noticeable increase in depth of quality in the class.

You can’t do a signing day wrap piece without comparing the present class to the school’s previous ones. Let’s go ahead and check that box before finishing up.

The 2020 class is the tenth since Urban Meyer left. Since ten is a nice round number, I took a look at the past decade of recruiting classes.

Going off of the Composite, here is how all those classes stack up against each other based on the numbers you’ll find on the team rankings pages.

Note: Composite player ratings are rendered as decimals (e.g. 0.9123), but 247 Sports chooses to render them as seen above (e.g. 91.23) on its team rankings pages. To keep consistency with what you’d see on their site, I’ve kept the formatting the same.

Of course, I just spent time in the previous section talking about how the raw 2019 ranking is misleading due to the immediate attrition. Shedding six of 25 signees is dropping almost a quarter of the class, after all.

Losing guys in the offseason after they signed has been more common than you might think. I went through at took out all such cases in this span, and only the 2013, 2014, and 2016 classes made it through the process unscathed. I also removed the two 2020 unsigned verbal commits.

Here is the table again based solely on players who were still on the roster in fall camp. Take the new rankings with a grain of salt, as I didn’t have the time to check every schools’ classes in every year to make the same adjustment for immediate offseason attrition. Florida’s true rank may be a little different than what the table shows in every year, not just the ones that needed adjustments.

The 2020 class looks better versus history now. The 2012 class remains the player average leader by a good margin, but the 2020 class actually advanced slightly (due to Britt being a low 4-star and Manuel a 3-star) to edge ahead of 2013 for second place by a hair. In points, which I think are less important than average rank, the 2020 class is now a clear third behind 2012 and 2013 and ahead of 2014.

Visuals may help, so here is the average player rank over time. 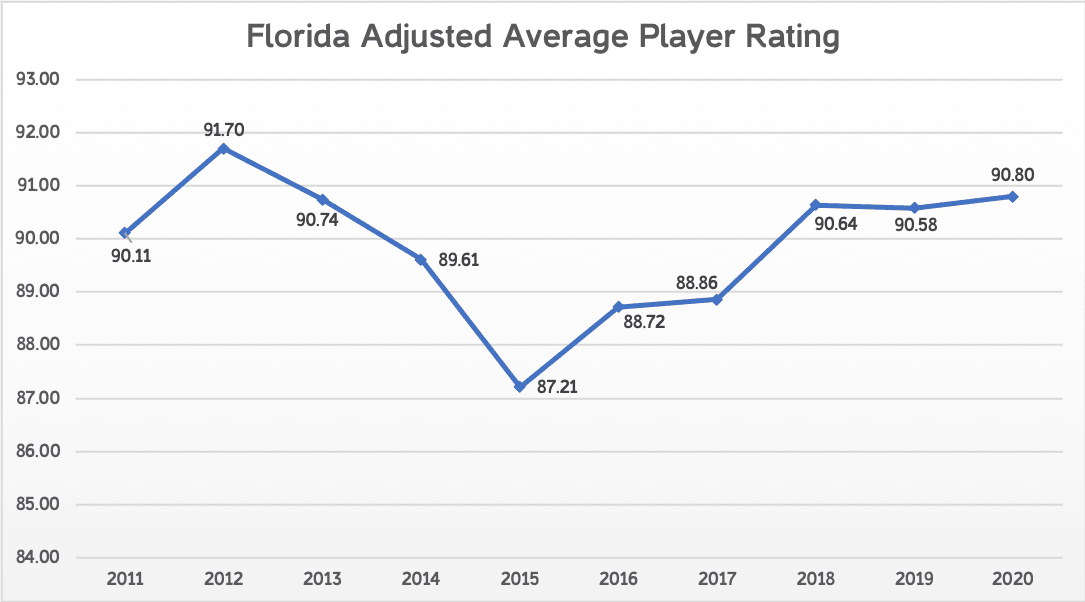 The McElwain-era dip in recruiting is impossible to miss, though it started with Will Muschamp’s final class going below the 90.00 mark. It’s worth noting that these initial ranks don’t always indicate quality; when The Athletic re-ranked the 2016 classes, Florida came in third in the country. Those McElwain classes had enough in them to form the core of a pair of top ten finishers in Mullen’s first two years.

Here is a chart of the class ranks over time adjusted for immediate departures. 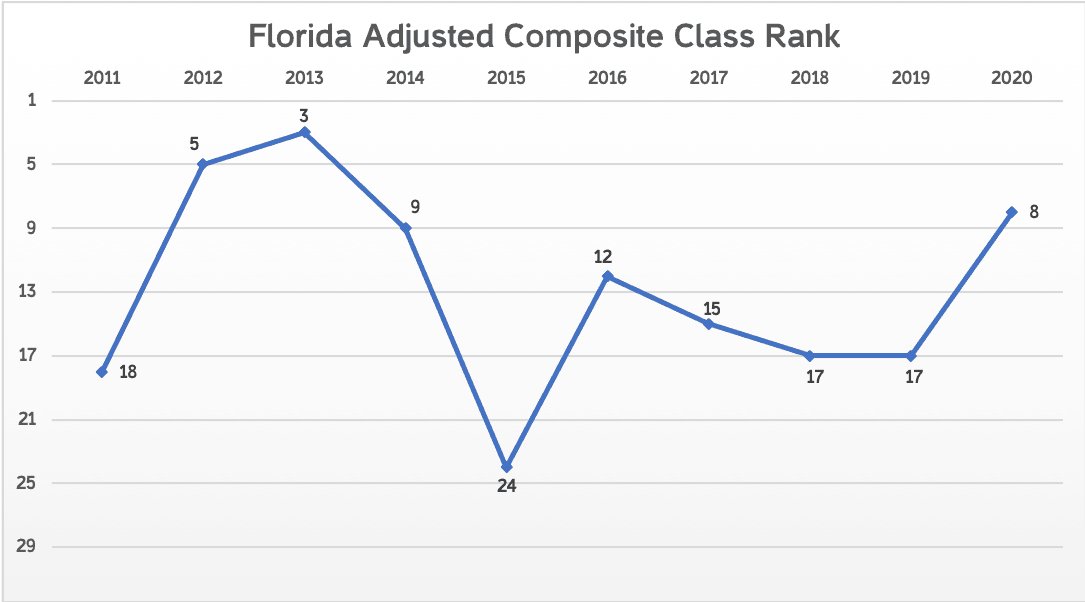 For the first time since the Muschamp era, Florida appears to have a true top ten class. McElwain’s last class finished tenth on National Signing Day, but a delayed signing for Notre Dame pushed the Gators down a spot to 11th. The 2019 class initially made the top ten, but again, it lost 24% of its signees within months.

Subtracting Britt and Manuel from the Composite figures still renders Florida at eighth nationally. The Gators are No. 8 in both Rivals and ESPN’s ranks as well. It’s worth repeating that the class could fall out of the top ten again if it experiences offseason attrition, which will also affect how it stacks up in the average rating and points comparisons too.

The low adjusted ranks for Mullen’s first two classes may come back to bite the team in coming seasons. It’s especially so considering that five other players are gone from the ’18 group for one reason or another, leaving just 13 of them still around this year. Bringing in three 5-star transfers from the high school class of ’18 in Cox, Lingard, and Shorter helps, but only Cox is guaranteed to be eligible to play this year. To date, the 2019 group hasn’t experienced any attrition beyond what’s reflected above, but the odds say it will over time.

More to the point, the 2020 class is a real sign of progress in the Mullen recruiting regime. If you factor out Crawshaw, the 22 remaining signees have a player average of 0.9132. That’s higher than the unadjusted average for 2019.

It doesn’t appear that there will be any non-qualifiers among the 23 that have signed, and none have problems with a federal visa that allows them to be in the country like Wardrick Wilson did (Crawshaw, an Aussie, has already enrolled). Therefore, issues that claimed four of the six departures from 2019 will not happen again with the players who have faxed in letters of intent. It would also be a good thing to see and end to the two-year streak of having a recruit dismissed months after signing day following allegations of violence against women (Justin Watkins, 2018; Jalon Jones, 2019).

Florida landed in a good place with its 2020 class. It’s in an even better place if you choose to count the incoming transfers. The immediate post-NSD analyses were rosy a year ago too, so it will be important to keep an eye on things and adjust our assessments as appropriate.

Still, it’s hard to complain about where the Gators ended up. They didn’t sign a ridiculously stacked class with an average near 93.00 or higher like Georgia, Alabama, Clemson, and LSU did, but basically only teams that have played in recent national title games do that. Believing it’s possible isn’t enough; you actually have to have done it.

Florida addressed its needs, signed its best Blue-Chip Ratio since Meyer’s blowout 2010 class, and didn’t have to take some chances like it did a year ago. The groceries are in the fridge. It’s now time for the chefs to make a gourmet meal out of them.