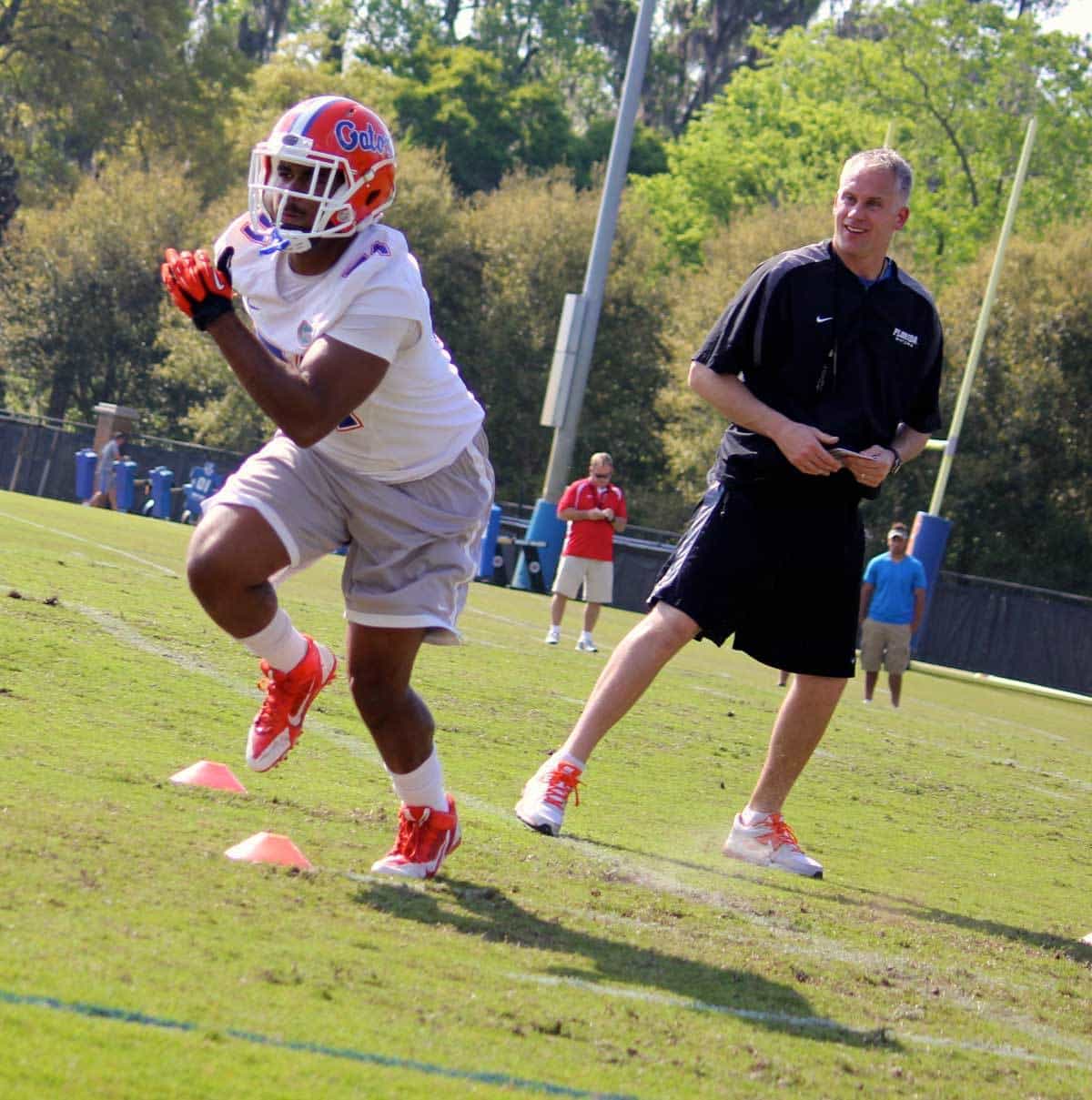 A few thoughts to jump start your Friday morning.

DONOVAN ON GETTING PLAYERS MORE

Thursday in Arlington, Texas, Florida coach Billy Donovan was asked if players should receive more benefits than just the scholarship they receive. Always candid, Donovan didn’t hesitate to say that players are indeed getting shorted. While schools rake in millions of dollars and have an inches-thick rule book that penalizes players for even the slightest transgressions, Donovan thinks there are some things that ought to change.

“The idea that a kid can’t get a free hamburger somewhere, it doesn’t make any sense to me,” Donovan said. “What’s the big deal? How is that hurting anybody?”

If a player accepts a free hamburger at a restaurant and it’s documented, then turned into the NCAA, the school is guilty of a major violation and the athlete has to pay back the restaurant for the price of the burger and can still be suspended.

Donovan said he isn’t sure what players should get or even should they be paid, but he says they deserve more than just the scholarship they’re getting now.

“I think the players do deserve more things,” Donovan said. “There are certain things that I think are outdated and don’t make sense in a lot of ways.  What those things are, should they be paid?  I don’t know what it is.  But there needs to be more done for the student‑athletes, in my opinion.

“They make an incredible investment.  They obviously are generating a lot of dollars on college campuses, and I don’t know what the solution is.  I do know that there needs to be a better way to take care of them in a way that maybe would not jeopardize or violate them being considered professionals.  I think there’s ways that we can do that.”

SEARCHING FOR QUALITY ON THE DL

As the Gators get ready for the final week of spring practice, coordinator D.J. Durkin is working hard to build up the depth on the defensive line. Durkin said Thursday that he’s pretty happy with his first string guys but the backups have got to step it up. “Right now, with our ones, we feel really good,” Durkin said. “There’s a drop-off between the ones and twos. We want it to be when the twos come in, there’s not a drop-off and we can go play and win games.” Right now, the Gators are looking good at the ends with Dante Fowler Jr. at the Buck and Bryan Cox Jr. on the strong side. The starting tackles right now would be Darious Cummings and Jonathan Bullard.

While Jameis Winston got a free pass from the Leon County State Attorney last year when he was accused of raping a Florida State University student, the US Department of Education’s Office of Civil Rights is investigating FSU and the way it handled the sexual assault violations against its Heisman Trophy-winning quarterback. In a story first reported by USAToday, the accuser filed a complaint with the Office of Civil Rights that could result in Title IX violations against the school. At issue is slow pace at which FSU handled the allegations of the accuser. FSU might have broken federal law by delaying its investigation and by meeting with Winston alone, which apparently went against legal advice. While Winston has skated so far, football players Chris Casher and Ronald Darby are in hot water with the school. They told the Tallahassee Policed Department that they witnessed the sex between Winston and the accuser. Casher even says he tried to join in but was told to leave. Apparently, Winston getting let off the hook by State Attorney Willie Meggs doesn’t get FSU off the hook for handling the case improperly. Stay tuned. This is going to get nasty.

SPRING FOOTBALL IN THE SEC

SEC teams are already planning out their summers to take advantage of a new NCAA rule that will allow one coach to work with players eight hours each week, of which two hours can be used for film review. The new rule does not excluse the head coach from working with players although South Carolina coach Steve Spurrier quipped, “I’m not going to be around that much, that’s for sure.” … Michael Sam and Kony Ealy are off to the NFL but just because Missouri lost its starting defensive ends, there shouldn’t be a lot of dropoff. Last year’s backups both were impressive as part-timers and their numbers should increase with full-time status. Markus Golden had 6.5 sacks and 13 tackles for loss as a backup while Shane Ray had 4.5 sacks, nine tackles for loss and 11 quarterback hurries … Former corner Jalen Mills and Ronald Martin have solidified their hold on the two safety positions at LSU … Vanderbilt’s September 6 game with Ole Miss could be moved to LP Field, home of the Tennessee Titans of the NFL … Five quarterbacks are battling for the starting job at Kentucky but so far no one has distinguished himself from the rest of the pack … Former LSU backup quarterback Stephen Rivers, brother of NFL quarterback Phillip Rivers, is likely to sign with Vanderbilt. He will be eligible immediately since he has graduated … Rising senior and career backup QB Blake Sims says he had the opportunity of a lifetime to claim the starting job at Alabama. Sims should enjoy his time as the spring starter. Come August, FSU transfer Jacob Coker will be the quarterback. You can etch that in stone.

Dallas Mavericks owner Mark Cuban is putting up the money for a study to find the potential benefits of human growth hormone (HGH) for athletes recovering from injuries. The study will take two years and needs approval from both the Food and Drug Administration and the DEA. Currently HGH is banned, but what if it’s discovered to be beneficial and is declared legal? Will that change the perception of Alex Rodriguez, Roger Clemens and Mark McGwire, who all used it to come back from injuries? Some athletes juiced to enhance performances such as Barry Bonds. Some used HGH to recover from injuries. This study could open up a huge can of worms.

There are some familiar names on the list of 10 officials that the NCAA has selected to call the games at the Final Four. The list includes: Pat Adams, Joe DeRosa, Verne Harris, John Higgins, Mike Roberts, Doug Shows, Doug Sirmons, Michael Stephens, Mike Stuart and Terry Wymer. Of the 10, Shows and Sirmons are probably the two best and most consistent officials in the game. Pat Adams called the only technical foul that’s been called on Billy Donovan this season and had a rotten time calling the SEC Championship Game. Mike Stuart kicked UConn coach Kevin Ollie out of a game with Louisville on January 18 with 13 minutes remaining. I’m not a big fan of Stuart. He is the zebra who blew two calls on Chandler Parsons (bogus charge and called a walk when Chandler got tripped intentionally by Perry Stevenson) in the final minutes at Rupp Arena in 2010. From my standpoint, the best crew for Florida-UConn would be Sirmons and/or Shows, Joe DeRosa and John Higgins.

Bob Dylan once remarked about Roy Orbison, the pride of Vernon, Texas, “He sounded like he was singing from an Olympian mountaintop.” Orbison had one of the greatest voices ever in rock and roll music. I was just about to enter the eighth grade at Westwood Junior High the first time I ever heard “Oh Pretty Woman” on WAPE in Jacksonville, which was required listening in those days. I still think that’s one of the 10 best songs I’ve ever heard. I found this version of “Oh Pretty Woman” from a 1987 Orbison concert (he died of a heart attack in 1988) that featured among others Bruce Springsteen, Elvis Costello, Jackson Browne, kd lang, Bonnie Raitt and Jennifer Warnes.