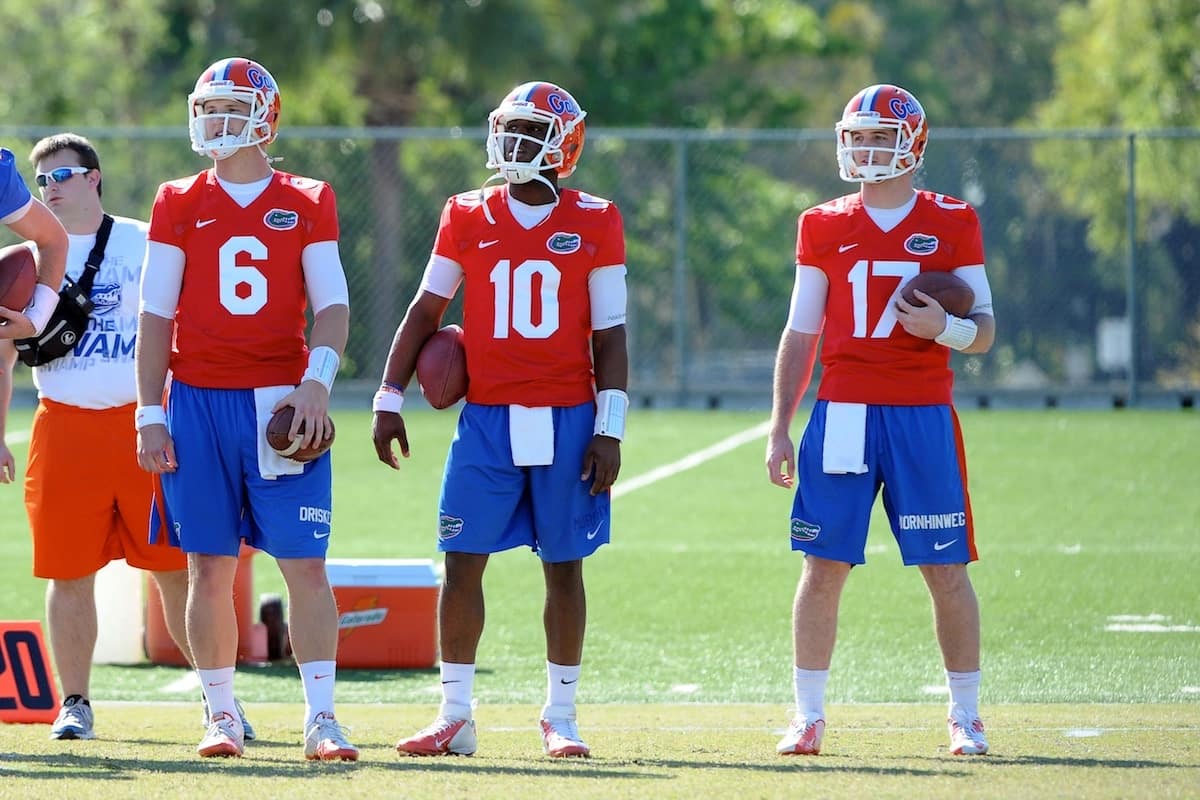 During his Tuesday Press conference, Will Muschamp singled out some players that he has been pleased with this spring.

In part two of this series, we take a look at the offensive players that Muschamp singled out and look at each position.

Anytime you quarterback a team that finishes the season with an 11-2 record, you should give yourself a pat on the back. Does that mean that Jeff Driskel had a great season? Not necessarily, but Driskel is making strides in spring practice and his head coach is taking notice.

“I think [Monday] he made some really nice throws – hit a sail route to Quinton [Dunbar] and an over route to Loucheiz. Very pleased with where we are in the throwing game. Still got to take care of the ball a little bit better in some situations, but I was really very pleased [Monday] walking off the practice field with the progress and what we did.”

From what we saw of Driskel during the two open days of spring practice, he looked very similar to what we saw on the field last season. He was still missing open receivers and was picked off a couple of times. He still makes the kind of throws that show his full potential and becoming more comfortable with the offense and the speed of the game will help him develop. It sounded like Driskel had a breakthrough day on Monday.

There is still a huge drop-off after Driskel on the depth chart. While not having to look over his shoulder worrying about being replaced by Jacoby Brissett should help with Driskel’s confidence, it leaves the Gators in a precarious position if Driskel were to go down with an injury.

“We need somebody to step up at the backup quarterback position,” Muschamp said. “Tyler and Skyler will have multiple opportunities throughout the spring to be in those situations and step forward for us and be a dependable backup for us.”

By all accounts Murphy and Mornhinweg have both had their fair share of struggles this spring. Murphy appears to be ahead of Mornhinweg, who has struggled with completely grasping the offense.

On paper, losing Mike Gillislee is a huge blow. Gillislee ran for 1,152 yards and 10 touchdowns his senior season. Fortunately for the Gators, Matt Jones has been in midseason form so far this spring. Early on last season, Jones was too hesitant in the backfield. After getting an earful from Muschamp, Jones started hitting the hole and running hard through it. He has stood out above the rest of the group this spring and all but locked up the starting spot this spring.

Muschamp took time to single out the progress Kelvin Taylor has made.

“Kelvin Taylor has really nice, natural running instincts, has just go to learn what to do and where to go. That’s no different than the other mid-year guys,” Muschamp continued. “Kelvin caught a nice screen, made a great cut in the middle for a score from about 40 [yards] out on Saturday. That was a really nice play on his part. But again, natural running instincts take over, we’re good. Assignments and some different things, protection from front to back and all that, we’re still at baby steps.”

The talent is there. Kelvin has the pedigree, instincts and ability to become every bit of the player his father was. He just needs to get in the playbook and nail down his protection assignments. If you can’t be an asset in pass protection, you won’t play running back for Muschamp.

Despite bringing two defensive players over to fullback, Hunter Joyer is still the man at that position. Joyer is not only one of the best run blockers on the team but is also a threat to run the ball and is a more than capable receiver out of the backfield.

“I think Hunter Joyer has done some nice things for us at the fullback position, continues to give us more things,” Muschamp said.

Muschamp has also been very impressed with Gideon Ajagbe.

The coaching staff is not happy with the inconsistency the tight ends have shown so far this spring. In the practices we saw, Clay Burton and Tevin Westbrook were the most active pass catchers followed by Kent Taylor. Colin Thompson was invisible during practice and that is disappointing given his size and ability.

“Clay Burton continues to do some nice things for us.” Muschamp said.  We need to continue making some strides at the tight end position. Consistency in their performance is not where it needs to be.”

Florida won’t be able to replace Jordan Reed’s production with just one player. They need more than one of their tight ends to step up and help fill that role this season.

The injury bug has hit the offensive line this spring and it has severely limited what the team can do as far as scrimmaging.

Muschamp announced Tuesday that Trip Thurman, who according to Muschamp was having an “outstanding spring”, was out with a shoulder injury and that it “didn’t look good right now.”

Max Garcia has been dealing with some back issues, but was back at practice on Tuesday.

The scholarship numbers are where Muschamp wants them to be, Florida has 11 scholarship linemen this spring, but injuries have hit the offensive line hard.

Demarcus Robinson is currently in a walking boot to protect a high ankle sprain. Muschamp hopes to have the talented receiver back next week. In talking to people who have been at practice, Robinson has been the most impressive receiver this spring.

Loucheiz Purifoy’s time as strictly an offensive player is over but Muschamp likes the progress he made at receiver this spring.

“He went [back to] defense and he took some snaps on offense in skeleton. We had a move-the-ball period and he probably took the first eight snaps on offense. Other than that he was exclusively on defense.” Muschamp continued. “I think he’s an explosive guy, catches the ball well has got good ball skills he’s got good vertical speed. He plays the game fast. I don’t know what his time is in the 40[-yard dash], but when you get on the field he plays fast. You notice him on the field.”