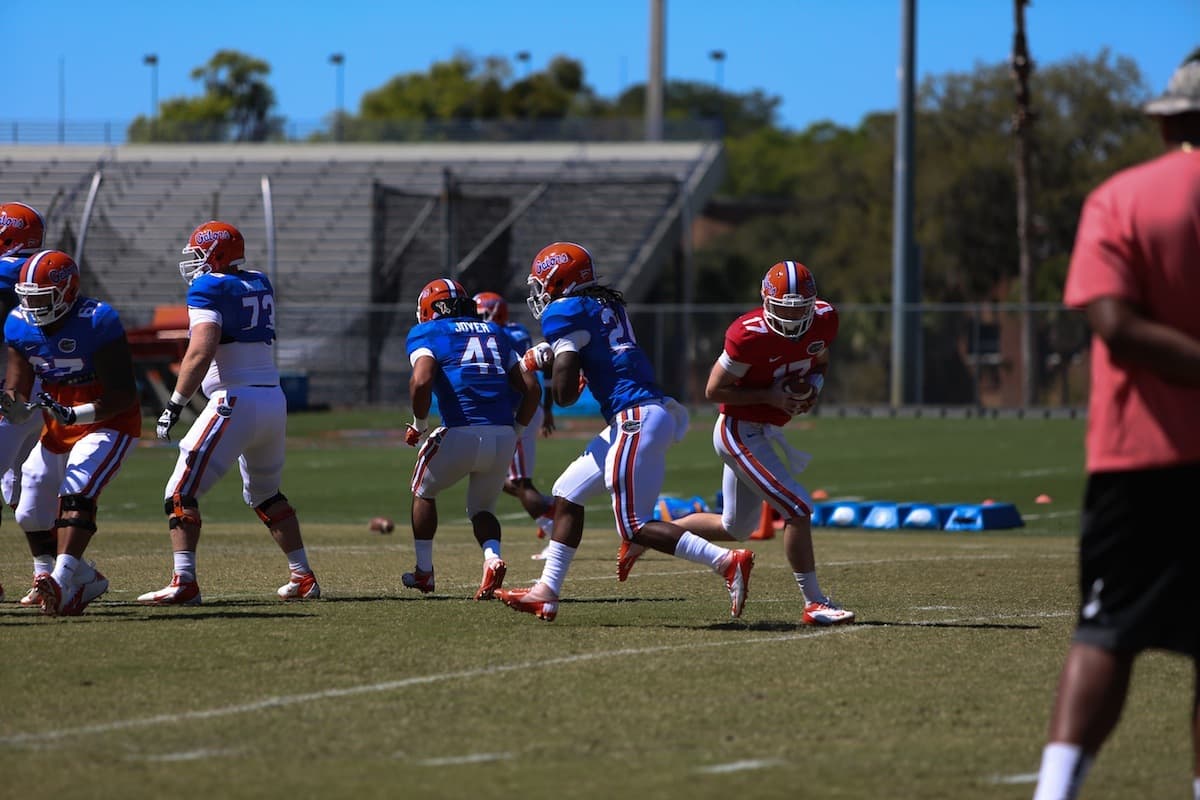 There are positions that keep Will Muschamp up at night. Positions like wide receiver, tight end and safety have yet to shake out and competition will continue into the summer for playing time.

One position that doesn’t keep Muschamp up at night is running back. In fact, knowing what he has at running back might help Muschamp get to sleep every night.

Two seasons ago the big question was; “how will the Gators replace Chris Rainey and Jeff Demps.”

Mike Gillislee was the answer. After setting the bar high for himself during SEC Media Days, Gillislee became the first Gator running back to surpass 1,000-yards rushing in a season since Ciatrick Fason in 2004.

Gillislee was the motor that kept the offense moving last season, however, with no eligibility left, the Gators must find a new motor for their run-heavy attack.

It took a while for the light to switch on in Jones’ head, but when it did, he became every bit of the 6’2” 226 pound, bruising runner Muschamp envisioned.

Jones began the season dancing around in the backfield too much. In high school, you see, Jones was able to run around kids. Well that’s not happening in the SEC so you need to evolve as a runner and find other ways to be successful. It took a spirited talk on the sideline from his head coach for that to sink in.

“It definitely meant a lot,” Jones said of Muschamp’s sideline chat. “Coming from high school we used to just run around everybody and go around blocks and not hit the hole. When I got here I thought it was going to be the same way, but getting it from the head coach meant a lot for me. I knew I had to hit it between the tackles and run angry … I definitely needed to hear it and it definitely made my game better.”

And Jones has run angry ever since.

Will Muschamp talked about how the defense gets excited when they wrap-up Jones during thud practice drills. Thud drills are where the defense wraps-up an offensive player but doesn’t finish the tackle. It’s a whole different story when you take the thud away and play for real.

“It’s interesting. Our defensive guys when we’re in thud, which means you stay up and tackle but we don’t pull to the ground, sometimes when we thud they think that they tackled him. When we’re tackling, they don’t tackle him.”

During the two days that media were allowed at practice, Jones stood out above the other running backs for his physicality. Jones doesn’t necessarily run around the field looking for defenders to hit but if a defender gets in his way, he’s not afraid to lower his helmet and go right into the defenders chest. Cody Riggs found this out the hard way in one of the more impressive hits we saw during our two days at practice.

But there’s more to his game that just being a battering ram out of the backfield. Jones also has the speed, quickness and patience necessary to be successful at the college level.

There’s a fine line between being patient and dancing in the backfield and that is something that Jones has learned quickly.

“There’s definitely a difference between [being] patient and dancing around.” Jones said. “Dancing around you’re playing and you’re trying to find something, but when you’re patient you wait on everything to develop and you understand the whole play and the concept of the play.”

Although he appears to be the next guy at tailback, Jones remains humble and hungry.

“I don’t think I’m the guy now,” Jones said. “I think I still have a lot of work to do in this offseason. Filling Gilly’s shoes is a lot of pressure, though. Whoever wins the battle, it’s going to be hard to fill his shoes.”

If Jones keeps doing what he has been doing this spring, he will be the guy to replace Gillislee as the starting tailback and if that’s the case, opposing defenders might want to take a lesson from Jack Parkman in Major League II.

“Don’t stand on the tracks when the train’s coming through.”