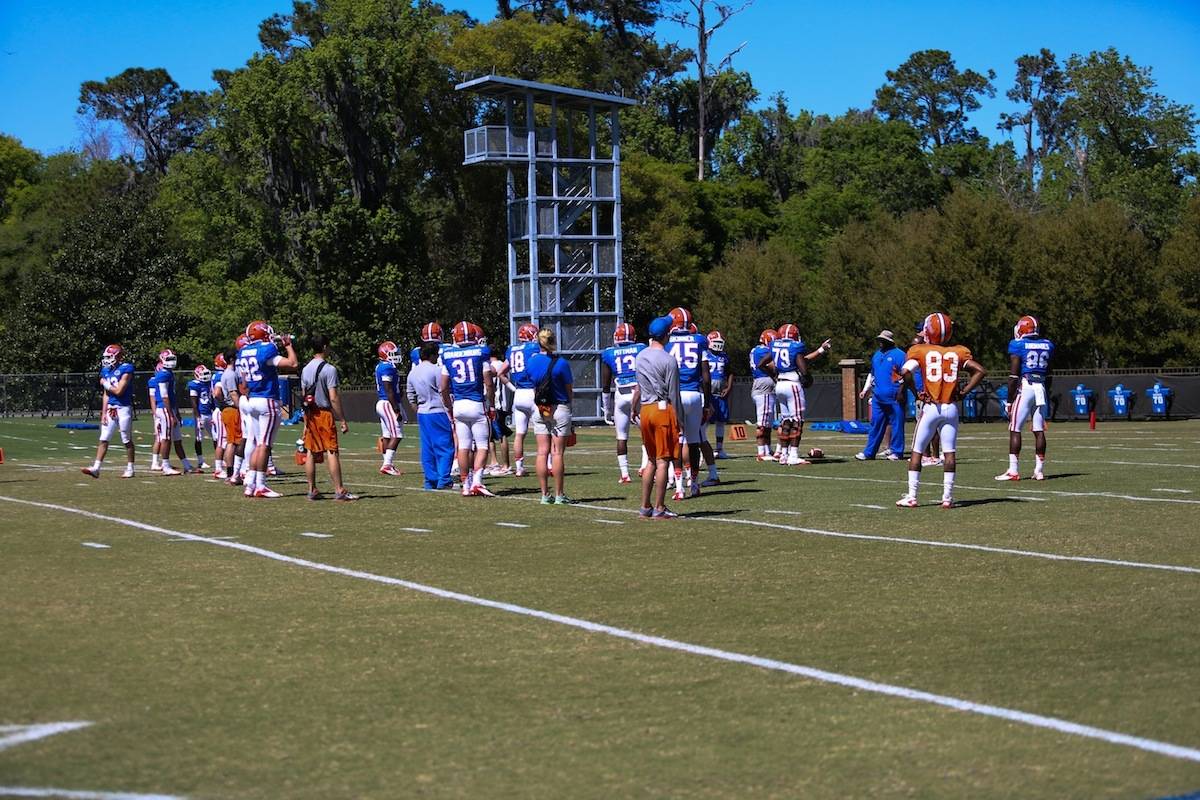 The dog days of spring football are starting to take their toll on the Gator football team. With just over half of their practice schedule completed, Will Muschamp’s football team is spending more time in the training room rather than the football field. It’s the price you pay when you try to instill a physical mentality into your football team.

Muschamp announced on Tuesday that offensive lineman Trip Thurman underwent an MRI for a shoulder injury. He joins Chaz Green (ankle) and Ian Silberman (shoulder) as linemen who are limited until at least the summer. Jon Halapio (knee) is also very limited in what he is being allowed to do at practice. Not to mention the uncertainty that surrounds Jessamen Dunker’s future with the program. That combination gives the coaching staff just six healthy, scholarship offensive lineman for the remainder of the spring.

“What really hurt us is on the offensive line. Right now we got six healthy guys.” Muschamp continued. “Our numbers are good as far as scholarships – we got 11 guys on scholarship right now for spring which is about normal of what you want with the incoming guys coming in to get your numbers to 15-17 in that range. But we’ve been hit.”

While the Gators have been low on bodies the past two seasons due to too few players on scholarships, this offseason it is injuries that are forcing the coaching staff’s hand. The lack of depth along the offensive line has limited what the team can do as far as 11-on-11 scrimmaging and will effect how the spring game looks this year once again.

“This coming Saturday, and even with the spring game, it may be more of a practice like atmosphere, which will be good from the standpoint of seeing some of the individual work we are trying to do. It’s an opportunity to get better and that’s what we’ve kind of focused on through spring.”

The past two years, the Gators would typically run anywhere between 120-130 snaps in a full scrimmage. That’s impossible to do with just six offensive linemen so the coaching staff has to find some creative ways to create meaningful reps for the players.

“[We will] incorporate within the scrimmage some 7-on-7’s, some special teams periods, where we just concentrate and we let those guys take a break. That’s how I’ve structured practice really is gone with certain spurts of scrimmage and then within that special teams, skeleton, one-on-one, different times of practice as opposed to just putting the ball down and scrimmaging.”

Offensive line isn’t the only position that has been hit with injuries. Cody Riggs and Jonathan Bullard are both day-to-day with hamstring injuries. Demarcus Robinson is in a walking boot to protect a high ankle sprain he suffered last week. Robinson is expected to be back at practice some time next week. Neiron Ball has also been hit with the injury bug. He’s dealing with an ankle injury that has limited what he can do in practice. Muschamp said Ball was limited to about 80% of yesterday’s practice and was hobbling a little after practice.

Spring football provides the coaching staff a little more leeway to have physical practices. With so much time until meaningful games begin, it’s good for the players to strap on the pads and play physical. Despite the injuries, Muschamp has been pleased with his team’s intensity and physicality this spring.

“We’ve still had a good, physical spring. I’ve been pleased with the physicality.”