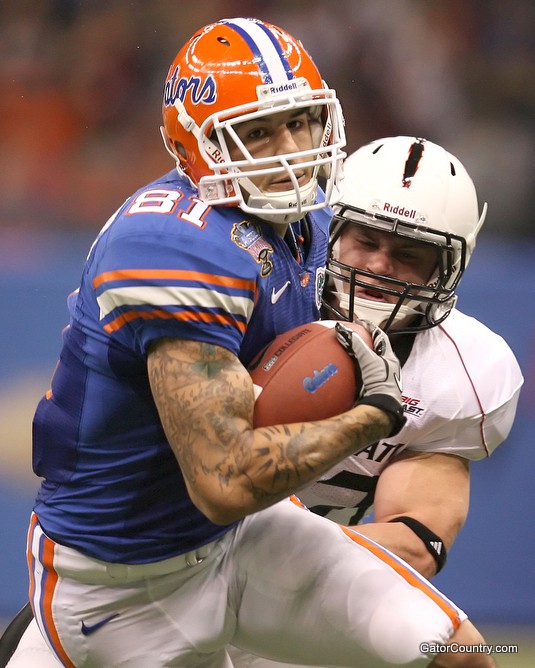 Former Florida Gator and New England Patriots tight end Aaron Hernandez was arrested earlier today and charged with murder in the first degree in the killing of 27-year-old semi-pro football player Odin Lloyd. Hernandez was also charged with five additional gun charges, all of which he pleaded not guilty to.

Lloyd’s body was found in an industrial park near Hernandez’s home and police began an investigation on June 17. Lloyd was shot four times in the chest and back and also once in the head. Hernandez and Lloyd were acquaintances and the two were seen together on the night Lloyd disappeared.

Bristol District Attorney Bill McCauley spent close to an hour today in courtroom No. 1 at Attleboro District Court presenting evidence uncovered by police and detailing the state’s case against Hernandez. Most of the evidence is circumstantial – most cases consist of circumstantial evidence – but the state feels like they have enough evidence and a motive to charge Hernandez with first-degree murder.

McCauley claimed that the state has evidence from Hernandez’s security system and cellular tracking data that place Lloyd, Hernandez and two other men at the crime scene. Additionally, the prosecution cited text messages that Lloyd sent to his sister while he was in the car with Hernandez. Lloyd asked his sister if she recognized who he was with. When she responded that she didn’t, Lloyd sent a text reading “NFL” followed by another text just one minute later reading “Just so you know.”

Police also uncovered footage from Hernandez’s security system of Hernandez carrying a gun from a car into his home. Shortly after Hernandez entered his home, the security system was shut off and there is about 7-8 hours of missing footage.

The prosecution has amassed a mountain of evidence against Hernandez but have yet to find a murder weapon or revealed how they will place the murder weapon in Hernandez’s hand to prove that he was the one who ultimately pulled the trigger.

Despite the lack of a weapon, the prosecution feels strongly that they have a solid case and McCauley expressed that today in court.

“It is established that the defendant [Hernandez] alone out of the three individuals had a relationship with the victim. The defendant had the motive, the means and the opportunity to orchestrate the crime.”

The motive that was detailed in court alleges that Hernandez and Lloyd got into a fight because Lloyd was associating with people that Hernandez was “at odds with” in the nightclub prior to Lloyd’s murder.

The prosecution also has statements from overnight workers at the industrial park reporting that they heard gunshots between 3:23 a.m. and 3:27 a.m. The park is located near Hernandez’s house and surveillance footage shows Hernandez returning home approximately two minutes after the reported gunshots.

Hernandez’s attorney, Michael Fee, made a case for Hernandez to be released on bond saying that Hernandez was not a flight risk, had a fiancée and 7-month old daughter at home, and didn’t have a criminal history. The judge denied the request for bail.

Hernandez’s attorneys and the prosecution agreed to a gag order and the judge has sealed all records regarding the case, as the investigation of the murder is still ongoing.