Spring Football is a time for learning. With no looming games, coaches are able to really dig into the details with their players.  They can spend more time on each scheme and help players not only understand what they’re doing, but also why they are doing it. The Gators seem to be a proponent of this spring strategy. Below, you can see the board behind Coach Mullen in the team meeting room. 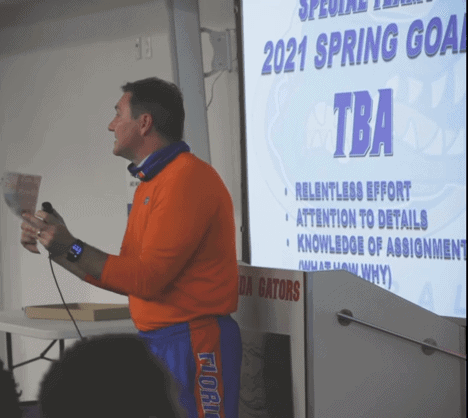 The goals are listed as Special Teams goals, but they apply to the whole team. They are as follow:

While player learning is a big part of spring practice, what the coaches learn may be just as important. This is especially true this spring with regards to the Florida offense. Looking up and down the offensive depth chart, you see a lot more names written in pencil than you do in Sharpie. There are very few spots in the starting lineup that seem to be locked down going into this final week of spring practice. While questions seemingly abound, there is one thing that is for sure: the offense will be different than last year.

Gone is the sturdy, pocket passer at quarterback whose mental processing speed made up for his lack of foot speed. In his place, the Gators will roll out a couple of athletic quarterbacks that can beat you through the air and on the ground. So what does this change mean for Dan Mullen’s offense? It means he’s going Back to the Future.

Urban Meyer and Dan Mullen broke onto the big-time college football scene together. Both were considered innovators on offense and they brought their version of the Spread to Florida after successful stops at Utah and Bowling Green.  Their offense was (and still is) based on space and numbers.  They spread the field formationally with a variety of personnel. If you didn’t equate numbers on the outside, they would throw the ball to one of their playmakers in space. 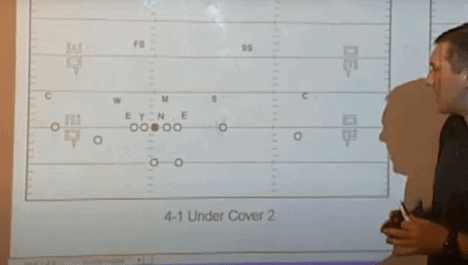 With this spread look, many defenses would have to give you a lighter box. If they stayed in 2 high safeties, you would get at most six defenders in the box if the defense wasn’t leaving the slots uncovered. With the quick throw to the slot as a threat,  it would function more like a five man box. With only one high safety, you add another player to the box. However, there are still responsibilities for one of the linebackers to at least split the difference between the box and the slot away from the now rolled down strong safety. 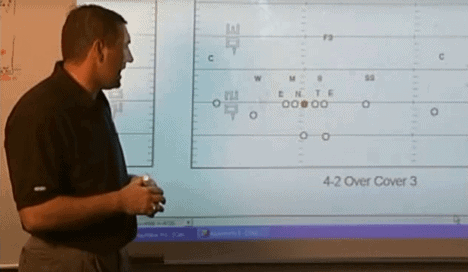 The quarterback run game can really change things for the offense. It especially can take some stress off the offensive line. You can use formations and backfield actions to manipulate the defense into easier looks to block.  If the defense has a stud that you cant block, guess what? You don’t have to block him. You can read him! The read part of the run game coupled with using multiple backfield actions also means your o-line will potentially have fewer blocking schemes to learn. You can run zone blocking up front and run four to five different concepts just by changing up the backfield action or adding a read. They look like different run to the defense, but they are all the same for the o-line.  Less thinking and more physicality on the o line is something all Florida fans can get behind.

In the video below I go through some of Mullen’s favorite quarterback run game concepts, dating all the way back to his days at Utah. He has some favorites that he’s called as the head coach at UF, but there are also some concepts and wrinkles I expect him to bring back from his past.