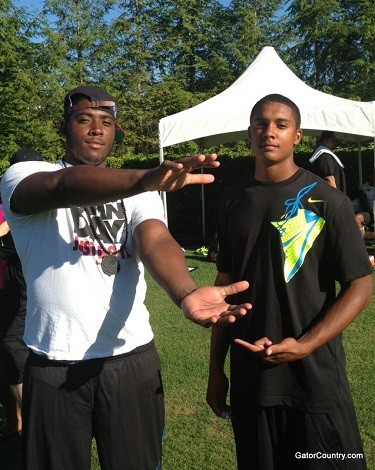 University School in Ft. Lauderdale, Florida was well represented this past week at The Opening in Beaverton, Oregon. Quarterback Sean White was the Elite 11 MVP and teammates, linebacker Richard Yeargin III and Quincy Wilson also showed well throughout the week.

Yeargin’s Alpha Pro 7-on-7 team made it to the championship game and Wilson’s team was the No. 1 ranked seed following pool play.

Gatorcountry.com caught up with Wilson before the event was over to talk about his recent trips to Ohio State, Notre Dame, USC and UCLA and where Florida still stands in his recruitment.

“It was great. It was my second time going up to Ohio State, I went last summer too. It was cool to get around, see the place, talk to Coach Meyer and talk with Coach Coombs,” Wilson said. “Me and Coach Coombs went over some stuff he likes to do with his defensive backs.”

“Notre Dame was cool. It was the first time I’ve been there so I got to see everything and be around the players and coaches and talk to Coach Kelly.”

Wilson told Gator Country that he hadn’t been home in over 10 days. He spent the past couple of days before The Opening taking in the campuses at USC and UCLA. He said he liked both schools and loved the California weather.

As we were interviewing Wilson, Florida running back commit Dalvin Cook ran by and gave us a Gator chomp. Wilson smiled and had this to say about Florida and Cook.

“Yeah he does [talk to me about Florida]. Him, Will Grier, Duke Dawson, they’re all on me about it,” Wilson said. “They tell me it’s the place to be and they’re going to do big things. It’s a possibility. I like the Gators.”

Currently, Wilson has a list of 13 schools that he is still considering, with Florida being one of those finalists. Wilson will visit Florida for Friday Night Lights later this month.

“I’ll be making a decision in August. If not by August, then I’ll wait until I take all of my official visits,” Wilson said. “I want to get it done before my season starts but I have to be sure, really sure about where I want to be at.”