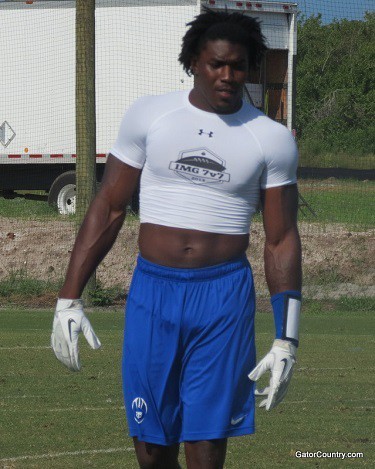 GatorCountry.com spent the past weekend in Bradenton, Fla. watching the IMG 7 on 7 National Championship. In these types of tournaments, it’s tough for linebackers and players who are 6’2”, 220-pounds to make an impact. 7 on 7 tournaments are tailored to small, quick, speedy players who can make someone miss in space.

While that may be the rule, there is always an exception.

Meet Bo Scarbrough. Scarbrough is a talented, 5-star athlete from Tuscaloosa who is currently committed to Nick Saban and the Crimson Tide.

One thing that complicates Scarbrough’s commitment to the Tide is his cousin, C’yontai Lewis. Scarbrough is very close with Lewis, a current commit to the Gators.

Both Lewis and Scarbrough transferred high schools prior to their senior season and will play with each other this upcoming fall. If things stand as they are now, it will be the last time the duo will play together. But will both players stick to their commitment?

“He’s [C’yontai Lewis] been on me kinda tough,” Scarbrough said, “but ya know if Alabama offers him I’m going to recruit him to come roll with the Tide.”

Lewis has told GatorCountry.com that his commitment is solid and that he feels like Alabama had the chance to offer him – he’s been to camp at Alabama and lives in Tuscaloosa – and that they have already missed out.

“Right now I don’t really now.” Scarbrough said. “I would have to go and visit, check out the academics of what I want to major in, that will be criminal justice. If they have a great program in it than it should be a battle.”

According to America.edu, Florida has the third best Criminal Justice program in the country. Alabama doesn’t rank in the top 20.

Another factor that will effect Scarbrough’s recruitment is his relationship with the coaching staff. Scarbrough told us that Brian White is his main recruiter and the two have developed a strong relationship.

Scarbrough has a busy summer planned ahead of him. Despite a packed plate, Scarbrough’s schedule does include a visit to Florida for Friday Night Lights. He doesn’t think that he will work out in Gainesville, rather using the opportunity to meet with the coaches, see the facilities and hang out with some of the other players.

Scarbrough will also visit Georgia and Florida State next month and while he insists that he is still solid to Alabama, he mentioned both Florida and Georgia as two other teams he is still seriously considering.

If Lewis can help the staff flip his cousin, he might win the Nick Washington Recruiter of the Year Award.