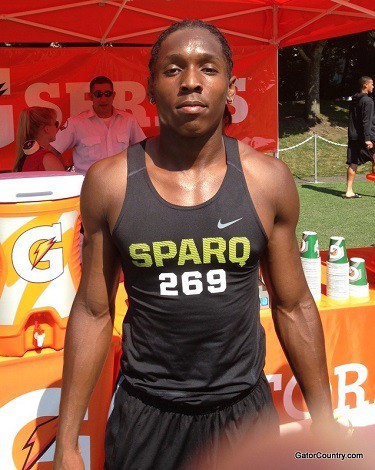 For most of the athletes at The Opening, football is their main sport. For cornerback Adoree Jackson, it’s only one-of-three sports that he plays. Jackson is a California state champion long jumper, as well as a football and basketball player.

Jackson admitted to being a little rusty today at The Opening but didn’t want to make excuses.

“I think another thing was that I was a little rusty because I don’t do football 24/7 like everybody. I do three different sports, football, basketball and track. So I just got to get back into the hang of things,” Jackson said. “I looked good but I know I’m way better than what I was doing. Receiver wise, that’s no question, I can do that with my eyes closed, but DB takes a lot more skill, if you take a day off you can tell. I think tomorrow I’ll be better. There were probably a little jitters, with all the pros out here you don’t want to mess up in front of them, but you gotta make mistakes to get better.”

Jackson received a lot of attention from Seattle Seahawks All-Pro cornerback Richard Sherman and some other NFL players today. He learned a lot from what they told him during practice.

Despite playing in California, The University of Florida is a school that has stood out to Jackson for a long time.

“Florida is a school that I’ve been thinking about going to since they won a championship in ’07 in football and basketball.”

Jackson told Gatorcountry.com that the only track coach he has spoken with is Florida Coach Mike Holloway and that being able to run track is very important in his recruitment. With Florida’s men’s track team coming off of another National Championship this year, the possibility of running track is something that Jackson really likes about Florida.

“To be 100, it’s a great thing to think about because they’re not just a great football program but they’re a great track program,” Jackson said. “Me being a track athlete and they have a great, great long jump coach so I know that he’ll get me ready to go to the Olympics in 2016.”