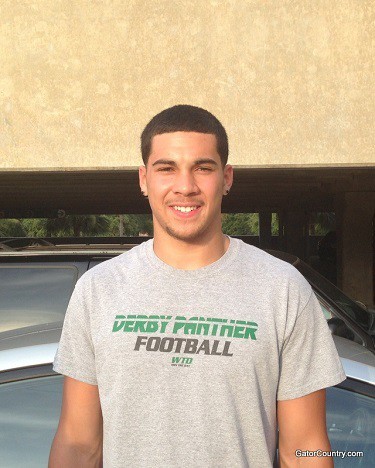 Florida hosted an unofficial visitor on campus today in Derby, Kansas, tight end DeAndre Goolsby. Goolsby spent the day touring the campus and facilities and got a chance to sit down with the coaching staff a day after his birthday.

Goolsby told us today that Derek Lewis is the main coach at Florida recruiting him and he enjoyed getting the chance to visit with Lewis on campus today.

“It was cool. He’s a cool coach. I like being around him,” Goolsby said. “He [Lewis] has a good history for sure. He played tight end, won Super Bowls and all that.”

Being from Kansas, Goolsby doesn’t have a lot of opportunities to visit Gainesville and see what the school has to offer. He said that he enjoyed the trip and being able to see Gainesville first hand definitely helps the Gators chances at landing him.

“It helped a lot,” Goolsby said. “Being able to see what they have out here and what they’ll be able to do.”

He apparently liked the school so much that he wants to plan another visit to come back and see a game in The Swamp this fall. He doesn’t have any plans to officially visit Florida – or any other school for that matter – and despite saying that he is tired of the recruiting process, he insists that he won’t rush a decision and will take all five of his official visits.

Goolsby doesn’t have a specific list narrowed down, but he hopes to have a clear list before his senior season begins and to have a decision on where he will attend college by the end of the year.

“Hopefully the end of the season,” Goolsby said. “I plan to narrow it down towards the beginning of the season.”

As far as distance being a factor or what other factors Goolsby will use to make his final decision, he has a clear list of criteria that each school will have to meet.

“It [distance from home] doesn’t really bother me as long as it feels right,” Goolsby continued. “Definitely coaching staff. Gotta fit in with them. It has to feel good being around everybody here. I’m just kind of seeing what’s out there right now. Just looking.”

Goolsby visited Ohio State on Monday and he came away impressed with Urban Meyer and the Buckeyes.

“It was good. Urban, I like talking to Urban,” Goolsby said. “They have a lot to offer there. They’re two different places [Florida and Ohio State] so you can’t really compare them. They both have a lot to offer and I like certain things about both schools.”

Both Ohio State and Florida already have tight ends committed this recruiting cycle. When asked if that will factor in to his decision, Goolsby gave an answer that would make any coach smile.

“No. I just see it as another way to make myself better and compete with other players.”

Goolsby said he wasn’t ready to make a decision anytime soon, but he is a player that Florida will continue to go after hard the rest of the recruiting cycle.

INSIDER Note: Goolsby is a prospect that is very high on the Florida board and someone that I expect Will Muschamp to personally recruit as the need for tight ends in this class is huge.