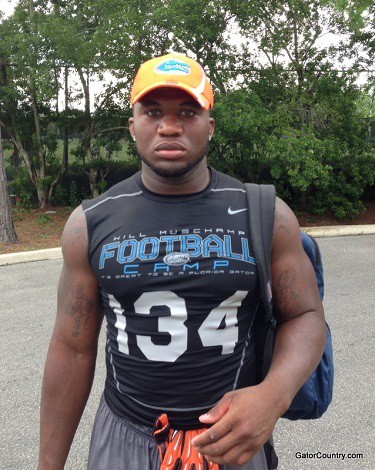 Will Muschamp’s football camp hosts all types of players. There are players like Duke Dawson and Anthony Moten who come to camp already committed to Florida. There are highly ranked and recruited players like JC Jackson who come to visit the school unofficially and work out for the coaching staff. There are also players who will never play a down of football for the Gators but use the camp as an opportunity to get coached by some of the best coaches in the country.

Players like Cortavious Givens came to Gainesville trying to show the coaches they are worthy of more attention and a potential scholarship.

Givens participated in camp on Saturday as a running back and he took the opportunity to show the coaching staff that he is fully healthy after an ACL surgery and was one of the best looking prospects on the day at running back.

“They just wanted to see me run after my knee surgery and everything like that,” Givens said. “My knee is good, there’s no discomfort, and I trust it and everything. I didn’t even have a brace on today. He [Coach Brian White] said I showed them everything that I can do, I was probably the best running back out there along with TJ Simmons.”

After tearing his ACL as a sophomore in high school, Givens spent the majority of his junior season playing linebacker. He projects more as a fullback or H-back type of player at the next level, so working out for the coaching staff and getting them new tape of him running the ball is a top priority for him.

“The big thing is he wants to see some senior film,” Givens said. “So I’m going to give him that, hopefully I can ball out during the first few games this fall.”

While Givens plays both running back and linebacker at Admiral Farragut High School, the coaching staff is looking at him to play fullback. With Hunter Joyer entering his junior season, the Gators need to find a replacement for Joyer this recruiting cycle. Givens said he is open to playing wherever the coaching staff needs him to play.

“I’m good with anything in Florida’s offense,” Givens told me. “Whether it’s receiver, running back, fullback, anything I can do.”

He didn’t leave camp with an offer from Florida but just getting the opportunity to work with the Florida coaching staff; Brian White in particular, made the trip to Gainesville worth it for Givens.

The workout also gave Givens an opportunity to speak with head coach Will Muschamp for the first time.

With his health no longer a question, Givens has a full slate of college camps set up for the summer and is ready to put together a great senior season in hopes of earning a scholarship. He is in no rush to commit early and told Gator Country that he will probably wait until national signing day to commit.

“I’m just letting everything fall in place. I probably won’t make a decision until national signing day unless something comes through and I just feel really comfortable with it and I feel at home.”