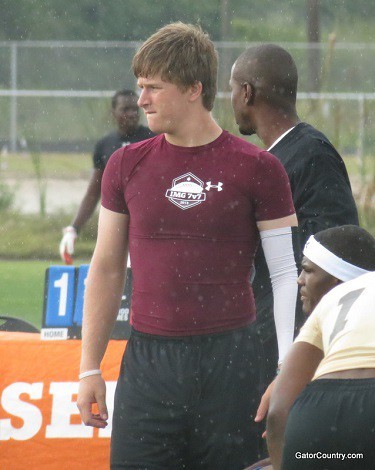 GatorCountry.com is heading out to Oregon to cover the Elite 11 quarterback camp and The Opening. As part of our coverage, we have been previewing the teams that will play this weekend, as well as the quarterbacks competing for a chance to be named one of the 11 best high school quarterbacks in the country.

Yesterday, we previewed the first nine quarterbacks in alphabetical order.  Today we take a look at the rest of the group before competition gets started tomorrow.

Heard is a dual-threat quarterback who uses his speed and quickness to create an advantage on the field. He’s far more advanced as a runner than he is as a passer at the moment due to the read-option offense ran at his high school.

Heard ran for 2,138 yards and 35 touchdowns while passing for more than 2,000 yards as a junior last season.

An event like the Elite 11 really showcases passing and Heard will be out looking to prove that he isn’t just a one trick pony this weekend in Beaverton.

Kaaya has prototypical size for the position and a frame that could support additional weight when he gets into a college conditioning program.

He has a very strong arm, but is able to put some touch on the ball when a pass calls for it. He shows good poise when he has a clean pocket and steps into his throws nicely when he has the time.

He has good feet but can get lazy with his mechanics at times. When his footwork is solid, he delivers a very catchable ball and is very accurate.

Kaaya chose Miami over an offer from San Diego State, but a solid performance this week could start to bring in more offers.

Kizer chose Notre Dame over an offer list that included over 20 of the best football programs in the country including Alabama, Arkansas, Michigan State, LSU and Tennessee.

He is very tall and throws from a high release. Kizer doesn’t have the strongest arm, but he is able to throw the ball with good touch and accuracy. He has a long way to go as a passer but has shown flashes of the kind of mechanics that make one believe that he will develop into a nice quarterback.

As a runner, Kizer doesn’t have blazing speed but has long strides and can make people miss. He has great vision as a runner and has the potential to become a dangerous dual-threat at Notre Dame with the right coaching.

Mahalak played wide receiver last season – that’s right, he hasn’t even started a varsity game at quarterback yet – but is still considered one of the best dual-threat quarterbacks in the recruiting class.

That being said, there was limited tape to review for Mahalak that featured him as a passer. I was able to find tape of Mahalak going through drills and some Elite 11 regional qualifier events. He has above-average footwork and arm strength. He has a nice compact delivery and it will be interesting to see what he does under center this season.

His commitment to Oregon is very firm and he looks to be the Duck’s quarterback of the future.

Park is a streaky passer who can go from hot to cold quickly. When he’s on, he’s one of the best quarterback prospects in the country. When he’s not, well that’s a whole different story.

Park is a little lanky for his height, but he has long arms and legs and looks like he can add another 15-20 pounds to his frame.

He has very good feet, a quick release and is a very accurate passer. He won’t wow you with how hard he can throw the ball, but he is able to mix up the speed of his passes and use touch all over the field to drop the ball into receivers’ hands.

Rubenzer is one of the most underrated quarterbacks coming into this camp. He has just one D1 scholarship offer (Cal), despite throwing for 2,834 yards and 36 touchdowns as a junior in high school. Not to mention, he added another 1,184 yards and 10 more touchdowns on the ground.

He needs to work on his arm strength, as he really struggles to drive the ball down field with any velocity. He projects as a dual-threat, short-to-intermediate passer at the next level.

Rubenzer will be out to prove that he belongs with the big boys this weekend and prove that he is worthy to be mentioned as one of the nation’s best.

Watson is widely considered to be the top dual-threat quarterback in the 2013 recruiting cycle. While he is worthy of that dual-threat moniker, he has a throwers mentality and has all the tools to develop into a very good quarterback at the next level.

He has a short, compact delivery and gets the ball out of his hand quickly. He has a powerful arm and can make every throw on the football field. He plays mostly out of the shotgun in high school, but he has good feet and a smooth drop back when I was able to see him under center.

As a junior, Watson threw for over 4,300 yards and 50 touchdowns while adding 1,444 rushing yards and 24 touchdowns on the ground.

Watson chose Clemson over offers from Georgia, Florida State, Ohio State and LSU among others.

White doesn’t have ideal size, I don’t think he’s actually 6’2”, but he is a very accurate quarterback with a strong arm and very solid mechanics.

White was the best quarterback at both IMG tournaments I attended this summer. He has shown that he can make every pass that will be asked of him at the next level.

A good performance this week should vault White onto the national stage and start bringing in bigger offers for the talented passer.

Wilkins is more developed as a runner right now but he has the tools to become an efficient passer. He has a high, tight, over-the-top delivery and can throw well on the run and in the pocket.

He has good fundamentals to build off of and a high ceiling.

Currently Wilkins only holds two division one scholarship offers but he is looking to prove that he belongs with the other quarterbacks in the Elite 11.