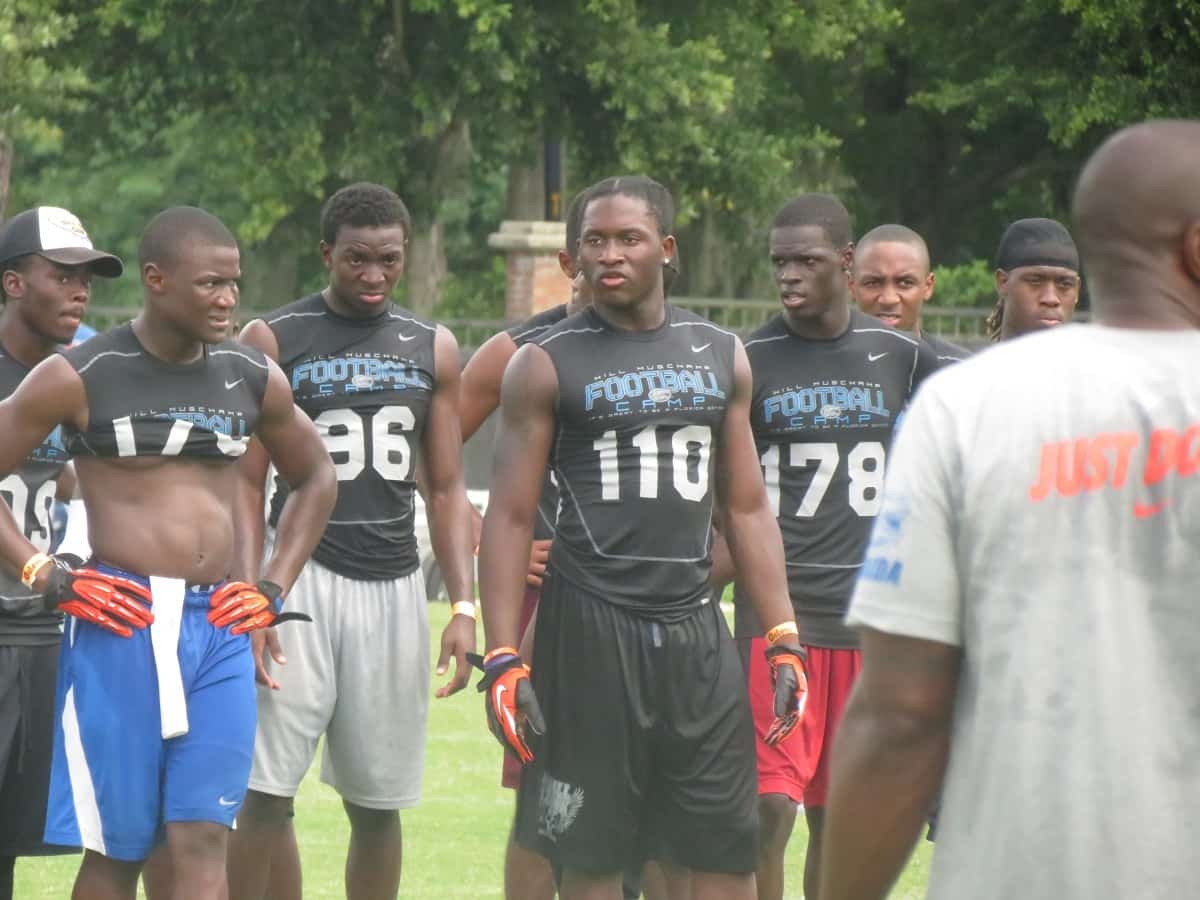 Yesterday marked the beginning of Will Muschamp’s football camps. There were a couple hundred players in attendance for the opening day, including 2014 cornerback commit, Duke Dawson.

Dawson committed to Florida back in January in an announcement ceremony at his high school. Initially, Dawson broke the hearts of Gator fans when he took off his track warm-up suit to reveal a Florida State t-shirt. He did the Seminole chop on stage before taking off that shirt to reveal a Florida Gator shirt underneath. Dawson emphatically Gator chomped, much to the delight of the crowd and to Gator Nation.

Despite being committed already, Dawson still decided to come out and compete  at camp. He was impressive in drills, coming up with multiple interceptions, and was the best defensive back at camp in the morning session.

“At first, I was just going to just come out here and hang out. Then I talked to one of my friends from Immokalee, JC Jackson, but he came out here late,” Dawson said.  “I talked to coach T-Rob [defensive backs coach Travaris Robinson] and he said he wanted me to still train and come and put some work in.”

Like Nick Washington did last year for the Gators, Dawson also wears the hat of recruiter for Florida and has been in the ear of JC Jackson, trying to get his friend to join him at Florida.

When I asked Dawson if he thought JC would join him at Florida, he said he thinks that Jackson will wind up a Gator.

“I got a feeling he will. I’m still trying to get him to come. I told him don’t hold back, just do it.”

Dawson’s feeling turned out to be accurate when JC Jackson pledged to Will Muschamp and the Gators after meeting with the coaches following camp on Monday.

As we all know, recruiting doesn’t end until the ink is dry on a national letter of intent and for a player like Dawson, schools will continue to send him letters and scholarship offers until he signs with Florida officially.

One of the schools that is still recruiting Dawson hard is Alabama, who recently offered him a scholarship. Dawson said he plans on visiting Alabama this summer with his family and his coach.

“I’m still solid to Florida,” Dawson told me. “I picked up that offer from Alabama, they want me to go up there and visit, so I’ll probably go check it out. I’m going to go up their with my mom, dad, brother and probably my coach.”

When I asked him what Alabama and Nick Saban would have to do in order for him to change his mind, Dawson had something to say that might not make Nick Saban and the Crimson Tide faithful very happy.

“There’s not really anything [that Alabama could do] I already have my mind set.”