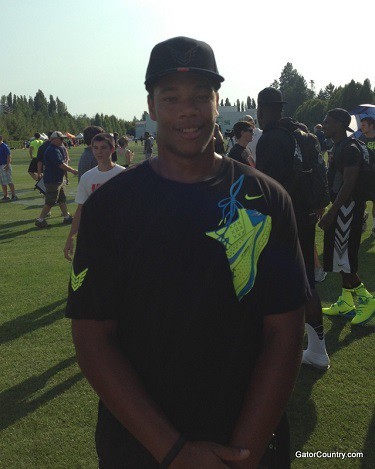 Will Muschamp will tell you that he and his staff are going to recruit the state of Florida first. With such a talent rich state, the Gators don’t have to go very far to pull in some of the top recruiting classes in the country.

While recruiting the state of Florida is Muschamp’s primary concern, they still go after some of the top talent from across the country. One of those players is Demetrius Knox from Fort Worth, Texas.

Knox is an offensive guard and close friends with another out-of-state player that is on Florida’s radar in Jamal Adams.

Knox told Gatorcountry.com today that the talent level here is a big step up from what he’s used to in Texas.

“It’s great competition out here. You come here to play the best,” Knox said. “I think I did OK today, but nowhere near my expectations. I lost one rep and I’m not used to that, I gotta be perfect.”

Knox continued talking about how challenging it is every single rep, trying to keep some of the best defensive linemen in the country in front of him and how there’s no room to take plays off.

“It’s a crazy, crazy jump in competition,” Knox said. “Not to say that I do this or anything, but in high school I could go out to a game or a practice and basically just chill or whatever. But up here you gotta be on your toes 24/7 ready to hit somebody. There’s no plays off.”

As far as his recruitment goes, Knox wouldn’t name a leader but said he is interested in Florida and has built a good relationship with Tim Davis, who is also his primary recruiter.

“He told me that they’re actually trying to recruit tackle bodies,” Knox said. “Not just tackle bodies to play offensive tackle but big, athletic linemen and they say I can fit that mold. I’m big but I can move.”

Most of the players who have committed to Florida – like Dalvin Cook, Duke Dawson, Anthony Moten and Will Grier – have been recruiting for the Gators while at the event. When I asked Knox who had been recruiting him for Florida, he gave a surprising answer.

“Jamal Adams has been in my ear a bit,” Knox said of the Florida safety target. “He’s not committed but he’s been talking to me about Florida. Just him pretty much.”

Knox said he plans to officially visit Florida for the Florida State game on November 30.