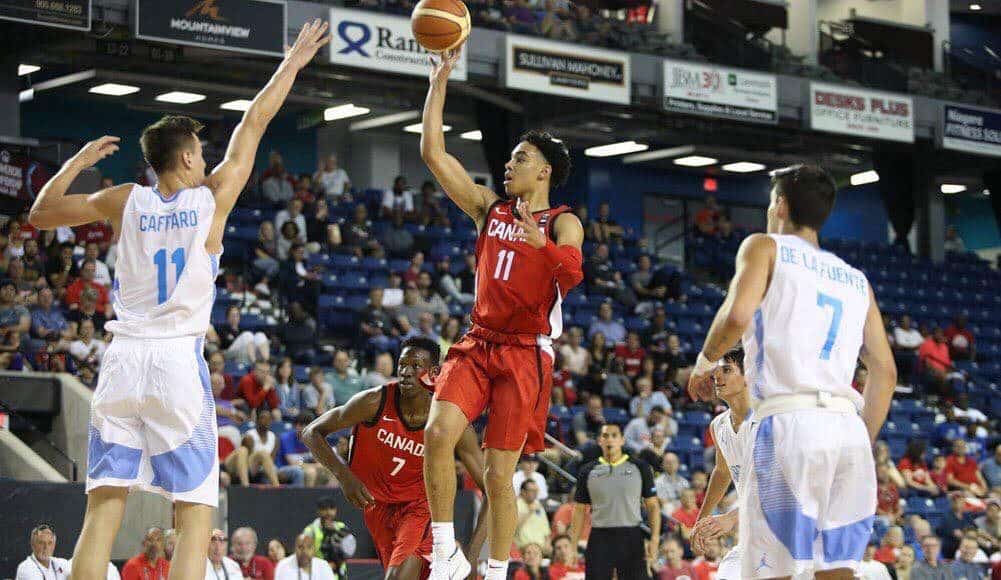 With the dog days of summer settling in for college basketball fans it’s always a treat when you get to see an upcoming recruit compete in some form of offseason event. Gators fans are particularly lucky as incoming 5-star point guard Andrew Nembhard was named captain of Canada’s Under-18 squad competing in the FIBA Americas tournament being played in St. Catharines, Ontario, Canada, only an hour and a half drive from Nembhard’s hometown of Aurora, Ontario. Starting at point guard, this event is a great opportunity for Nembhard to get a lot of great games against solid competition (6 games in 7 days, that’s a good summer run!) and also get some experience in the international game. Coach Mike White and his staff even made the trip up to Canada to watch Nembhard play so you know they consider this experience to be valuable. Nembhard just lead his team to a 3-0 record during group play beating Argentina, Ecuador, and Chile, and now has a day off before starting the playoff rounds. Here is how he played:

Though the margin of victory limited his minutes in two of the three games (a smart move given the large amount of games in a short amount of time) he was still able to really put up numbers. Though the group round Nembhard is leading the tournament in scoring at 20.3 points per game and efficiency per game at 23.0 (a catch-all stat FIBA uses that takes in all positive and negative data from a player’s game and calculates a single number) while currently being tied for the lead in assists per game with 7.3.

Here are some of the things I’ve taken away from Nembhard’s first three games of the tournament.

Firstly, he is definitely hunting his jump shot in a way I’ve never seen from him before. He’s taken 18 threes through 3 games, a number I wouldn’t have expected. Many have been wide open through the flow of the magnificent offense Canada has (orchestrated, of course, by Nembhard at the point) but he has also looked to create space for his jumper and pulled up for a few mid-range attempts that looked significantly more confident then what we saw from him in high school. Knocking down 8 of his 18 long-ball attempts for 44.4% and showing better mechanics than I last saw him with, his 3-point shooting could be a lot tighter than first expected by the time he comes to Gainesville. He doesn’t dip his legs or drop the ball as much as he used to and it looks like he has brought his release point up a tad, making his jump shot a lot “quieter” (less moving parts) which should bring a lot more consistency. He’s still moving a bit too much in my opinion but it’s already a hugely improved stroke from when I last saw him around a month ago. In terms of him shooting 44.4% through 3 games, I should also add that he’s hitting these threes on a FIBA court meaning the 3-point line is further from the hoop than the college line (the FIBA line is 22.15 feet where the college line is 20.75 feet). That means the threes he has been hitting at an outstanding clip would be from well behind the college line which is very encouraging.

Secondly, it was Nembhard’s left hand that left me excited for his time in the orange and blue. Am I a huge nerd for getting excited about a recruit’s improved off hand? Yes. But trust me, it was something special. Most players coming out of high school are extremely reliant on their dominant hand and can be pretty limited when asked to do something opposite to that. Nembhard must have been putting in some focused work to strengthen his left hand because he was whipping passes with it, executing dribble moves with it, and most importantly finishing around the hoop with it. He looked extremely comfortable around the hoop with the off hand both when taking contact before laying it in or scooping a floater to avoid a shot blocker. One of the areas I thought Nembhard needed to improve was his ability to finish inside and his development with both hands has made me a lot more comfortable with that aspect of his game.

Lastly, what impressed me about Nembhard was his ability to play the passing lanes and pick the pockets of his opponents. His 9 steals in fairly limited minutes so far shows how active he has been and whether it’s reading a pass and shooting a gap or sneaking behind a player to poke the ball out he’s been dispossessing opponents at a high rate. Though his defense has been decent at this tournament I still am uncertain of how he’ll be as a freshman against the top level of NCAA competition, but his ability to read plays and get a hand in could make up for the foot speed he may be giving up to the guard opposite to him. Mike White has been an excellent defensive coach throughout his coaching career and I’m sure he’ll find a way to best deploy him and I’m sure his defensive work so far has been encouraging to him.

Team Canada is on a collision course to take on Team USA in the finals, a matchup that will really test Nembhard as he would take on players like Coby White (North Carolina), Quentin Grimes (Kansas), and Cole Anthony (the 4th ranked player in 2019). I’ll have another update after the playoff rounds.

The games are being streamed on YouTube through FIBA’s official page, so I would encourage you to watch if you’re looking for some great offseason basketball.