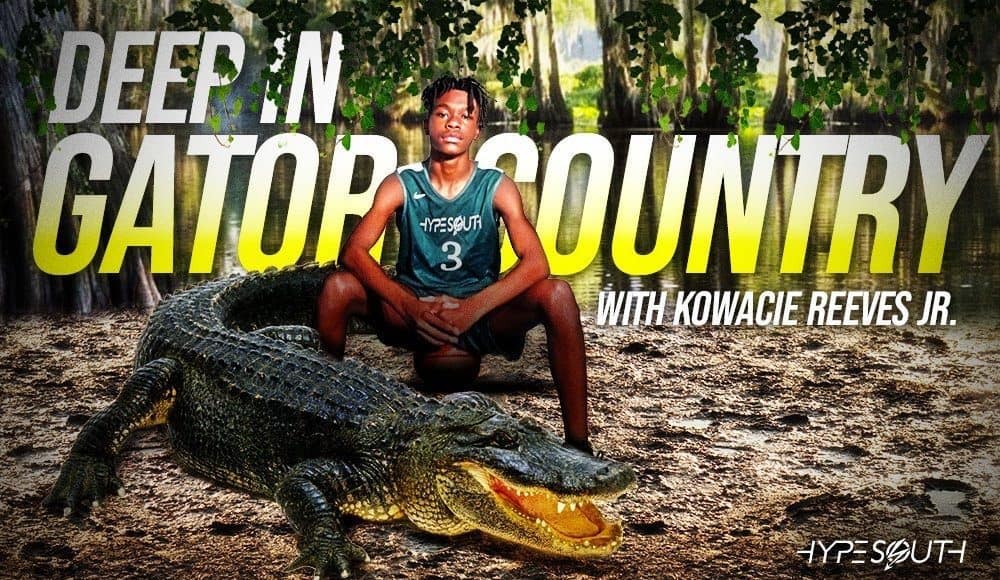 A story years in the making wrote it’s next chapter on Wednesday as class of 2021 stud Kowacie Reeves Jr. signed with the Gators for the 2021-22 season.

Even though he is still a year away from taking the court in orange and blue, Reeves’ story is already one of loyalty and trust. Years ago in 2018 when Reeves was just emerging on the scene, Florida gave him his first D-I offer. His tweet announcing the offer remained pinned at the top of his twitter account for nearly two years until the day he announced his commitment to the Gators which happened in April of this year. Nowadays you see most top-level recruits waiting until midway through their senior year of high school to make a decision but not Reeves–midway through his junior year he knew where he wanted to go. Fast forward to Wednesday, November 11, the first day of early signing period.

After the Gators were his first offer, one he cherished the entire recruiting process, and he committed early in the cycle, was there any doubt he’d sign as soon as he could?

Reeves is currently 56th ranked player in the class, though multiple recruiting analysts have him as a 5-star. In terms of the services that don’t have him rated that highly, well, Reeves’ loyalty plays a role there too.

After outstanding freshman and sophomore seasons in high school Reeves had offers to move all over the country and play at basketball powerhouses. Instead, he chose to stay at home with his tight-knit family and friends he has grown up playing with. Countless AAU factories wanted him for summer ball, but he continued to play with a team called Georgia Magic program that he grew up next to. Reeves is from Macon, in middle Georgia. That’s a region where players have historically been slept on based on the idea that all the good hoops players are in nearby Atlanta, and that certainly plays a role in the way recruiting services have viewed Reeves.

When the Gators offered Reeves back in 2018 he stood 6’2” and was known as one of the best shooters in the class who also offered high basketball IQ and unselfishness. Seeing the 6’2” Reeves light it up from deep it was easy to see comparisons to Noah Locke, a similarly built guard.

However, Reeves started to grow. And grow. And grow a little more. He now stands at 6’6” with long arms that suggest he might not yet be done growing. It wasn’t just his frame that improved but his athleticism as well. Reeves’ works diligently on his body, including a nightly stretching routine, and the fruits of his labor are an explosive leaping ability as good as any player in the class. Fortunately, as his size and athleticism grew he didn’t lose his jump shot and the ability to hit from range is a key element of his game.

It’s looking like Reeves will be the only high school recruit the Gators take in the 2021 class. Florida’s staff has made it apparent with their actions that they’re not going to take high school recruits unless they are 100% sold on them as a player and are likely going to lean more on the transfer market than the traditional high school recruiting structure. While Reeves might be the only Gator recruit in the 2021 class he definitely makes the future look bright for Florida basketball. His best position might be at shooting guard where he can play off the ball a bit while still taking some ball handling duties but he also has the size to easily play small forward. He’s more than capable of handling point guard duties for a time and putting his 6’6” frame at the 1 can make for serious mismatches. However the Gators decide to build their roster Reeves will fit seamlessly and give them plenty of flexibility on the court.

Whether it’s his play on the court or his loyalty off of it Kowacie Reeves Jr. is going to be a fan favorite and signing on Wednesday is just one of the many great chapters of the story he’s going to have with the Gators.

The graphic for the article is courtesy of HypeSouth Media, owned by Kowacie Reeves Sr.