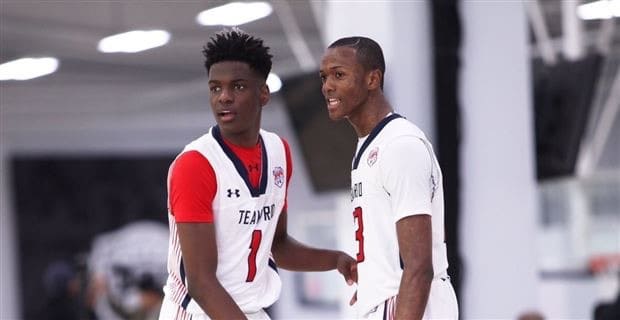 After a quiet period across the landscape of college basketball recruiting things are about to heat up for the July live period. With the Gators’ 2019 recruiting class still sitting empty the coaching staff has all the space and versatility in the world to craft a class that can continue the recent success of Mike White and the Florida basketball program. Here are a few, but not all, of the names you should look out for in the next coming weeks for a possible commitment.

Mann has been the top point guard on the wish list of many Florida fans due to his electric scoring ability and the fact that he’s a Gainesville native. Shifty when attacking the hoop and dangerously accurate when pulling up from the perimeter he’s more of a scoring guard than a true point and he’s a player that can be your primary weapon on offense. Many people expected Florida State to be battling the Gators for Mann’s services but the Seminoles were shut out when Mann announced his top 3 of Florida, Tennessee, and Kansas. He has also announced an official date for his announcement, July 30th at 6 PM. According to 247 Sports’ crystal ball the Gators are a 62% favorite with the Volunteers holding on to 38% and the Jayhawks getting shut out. Mann would be a huge get for the team as the current roster only has one “true” point guard (I’m not counting Okauru as a point guard yet as he played the off guard all of his freshman season, though he could move back to point like he played in high school) and there are rumblings that Andrew Nembhard could be in the one-and-done discussion leaving the Gators in even more need of a ball handler. Though we still have a few anxious weeks to wait you’ll have to keep an eye on Mann as the Gators desperately try to keep him in the state.

A versatile wing that could play from shooting guard all the way up to power forward Gantt Jr. is a the kind of player that is sought after by every coach in the country and is one of the many long shooting guards and small forwards Coach White has identified in the 2019 class to replenish a roster that doesn’t currently have a lot of wing utility. Not particularly polished offensively, he uses his motor and athleticism to affect games on defense and on the glass. Rugged and competitive, his willingness to do anything it takes to win is certain to make him a fan favorite wherever he goes. After naming a top-9 schools it was tough to gauge where exactly the Gators sat with him but after scheduling an official visit to Florida you can assume they are soundly in the mix. Though Providence and Virginia Tech are considered favorites I don’t think you can count the Gators out until Gantt Jr.’s visits are completed.

Jitoboh is a monster of a man. Just an incredible physical force. A player who has been working on refining his body, Jitoboh has been quickly rising in recruiting rankings and has gotten major interest from teams like Louisville, Tennessee, and Arkansas in addition to the Gators. His recruitment has been quite interesting as in the midst of his steady incline in rankings he broke his foot right in front of where Mike White happened to be sitting to watch him play. That injury finished his season and left coaches and recruiting services to wonder how to assess a player who’s slower, physical style of play probably would have been better suited to basketball a decade ago than what we’re seeing now. The Gators have clearly been interested and could definitely point to the physical development of Isaiah Stokes as a lure for Jitoboh to see what he could accomplish if he came to Gainesville and got into the strength and conditioning program. Certain to be a force inside, Jitoboh is likely a 4-year player that could provide the Gators with multiple seasons of physical toughness on defense and on the glass. The Gators are considered to be in his top-3 schools alongside Louisville and Tennessee with the Cardinals having the inside track. I’m not sure if he is in the top tier of priority for the staff right now but if the Gators were to miss out on some of their other frontcourt targets Jitoboh could still be a great get.

Florida is in a star-studded list of final schools for Antoine joining Duke, Kentucky, Villanova, and Kansas. It feels good to be back in the discussion for top-10 talent alongside these other blue bloods, doesn’t it?

It’s not hard to see why Antoine is the #6 player in the class possessing prototypical size for a guard and combining a fluid skillset with explosive jumping ability. Regarding his skill level, there is a lot of discussion that he may be looking to play the point in college (something the Gators could definitely offer him, which I hope they remember to mention during their recruiting pitch!). Duke is considered to be the heavy favorite here but with so many elite schools in his final five I think just about anything could happen here. The fact he set up an official visit is a great sign and even if the Gators don’t land him it’s great to see that the Gators are on the radar for an elite level talent who is from another part of the country. Another interesting element of the Antoine story is the fact that he is teammates, and best friends, with another Gators’ target named Scottie Lewis. Let’s take a moment to discuss him…

The recruitment of Lewis and Antoine has been tied in to each other to an extent as the two wings have openly discussed that they might want to play with each other in college. The Gators have always been considered to be in a better place with Lewis than with Antoine, so landing Lewis might even help them get 2 top-10 talents in the 2019 class. A speedy wing that can take off at any moment for a powerful dunk or silky jumper, Lewis is an immediate impact player who will likely be a one-and-done player headed to the NBA Draft. Lewis is also a very intelligent and well-spoken kid, evidenced by the variety of his final 7 schools including Florida, Villanova, St. John’s, Kentucky, Duke, Stanford, and Harvard. With a top seven that eclectic it might be hard to predict where he’s headed but the 247 Sports crystal ball has the Gators leading the way but with only 38% trailed by St. John’s at 25%, Kentucky at 25%, and Villanova at 12%. Lewis is a player that won’t only have an impact on the court but off it and all around campus with his infectious personality and he is likely the #1 priority of the Gators’ staff for the 2019 class. He hasn’t set any official visits yet but has unofficially visited Gainesville on multiple occasions and he isn’t at all unfamiliar to the area. Definitely keep an eye out for who could be one of the most exciting Florida recruits in years if he chooses the orange and blue.