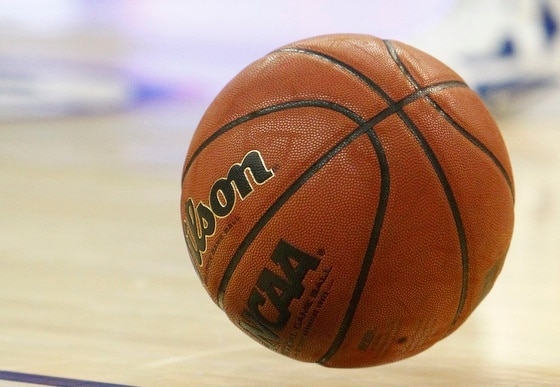 “He got me,” Francis said after Arlington Country Day knocked off Potters House Christian Academy, 54-42. “He got me good. I got him a couple of times too, but yeah, he got me.”

Francis, who has signed to play basketball at the University of Florida next season, wasn’t the only one that Azubuike got. The big sophomore from Nigeria blocked 10 shots, most of them in volleyball-spike fashion, but the blocked shots only told half of the story. He altered at least 10 more and in doing so made a lot of people look silly. It was all part of the growing process for Azubukie, who is absorbing basketball like a sponge.

In addition to all the blocked and altered shots, Azubuike contributed five points – two on a spectacular finish on an alley-oop when he had to reach behind him to grab the ball but still had the strength to finish with a resounding dunk – and 10 rebounds. Scoring was a chore because ACD went zone and collapsed its own formidable front line – the Apaches kept rotating five guys who ranged from 6-8 to 7-0 in and out of the game – around Azubuike every time he touched the ball but even when he got entry passes and had only one man to beat it was obvious that he’s got a way to go before he’s offensively polished.

As for rebounding, he finally tired of all the slaps and hacks in the fourth quarter. There were three man-sized rebounds when Azubuike got both hands on the ball and literally ripped it away with such force that bodies went flying. At some point, he will realize that the only way to stop all the pesky little guys from trying to take the ball away is to use physical force.

But right now, physical force is one of those things Azubuike is still learning to harness.

“He’s too nice,” Potters House coach Steve McLaughlin said. “He’s the biggest and strongest kid out there and he’s got to figure that out and take advantage of it.”

Perhaps the reason Udoka Azubuike is so nice is he’s still just a kid, still just happy to be playing. It’s still a game to him and since he’s just a sophomore, sheltered by his coach from the college coaches, street agents, etc., it’s all just fun and not a business.

In some respects Thursday night, it was like a child going against grown men. Some of the kids on Arlington Country Day were four and five years older.

His age helps to explain why he’s still so raw. He is a kid in a man’s body. Azubuike’s coordination is only beginning to catch up with physical development. As impressive a specimen as Azubuike is now, he will get taller and when he discovers the weight room his body will fill out impressively.

His face is smooth as a baby’s butt and there isn’t a hint of a whisker. Once kids start shaving they’re about as tall as they’re ever going to be. Their bodies might add muscle but for the most part, growth is over.

With added size and strength to go with the development that is already taking place, Azubuike could very well turn into the top prospect for the recruiting class of 2016.

For now, however, that seems like light years away.

“He has no idea how good he’s going to be,” McLaughlin said. “None. He’s just a happy kid who loves to play. He’s really coachable. He learns something new every day.”

The future will become crystal clear for Azubuike somewhere down the line but for now he’s very happy just to be a kid in a new country.

SCOUTING REPORT: Azubuike still hasn’t discovered that it is legal to jump any time he wants. His feet stay glued to the ground about half the time, a sign that he’s still having to think about what he does instead of just letting his instincts take over.

He has huge hands that are very strong, but his coordination is only just now starting to catch up with the strength. Right now, it isn’t until he is angered with all the slapping and hacking that he reacts by squeezing the life out of the ball when it hits his hands.

Offensively, he’s all right handed. If he catches the ball on the left side of the lane, he’s a threat to score because he can turn his left shoulder and then use his right hand. He can’t do that from the other side yet.

Azubuike shot four free throws. He looked good the first two although only one dropped. The second two were bricks, perhaps because he was tired as there was no flexibility in the knees when he shot the ball.

He is far more comfortable leaving his man and blocking shots off the ball than he is handing his man straight up.

Brandone Francis: He continues his recent struggles from the outside because he’s not squaring up his shoulders and going straight up. Instead, he’s leaning one way or the other and his shot is drawing iron. Francis said after the game he’s got to get in the gym and get his balance back so he can start hitting shots again.

All seven of Francis’ shots from the field were finishes at the rim. He had two on fast breaks, the other five off the bounce when he slashed to the basket.