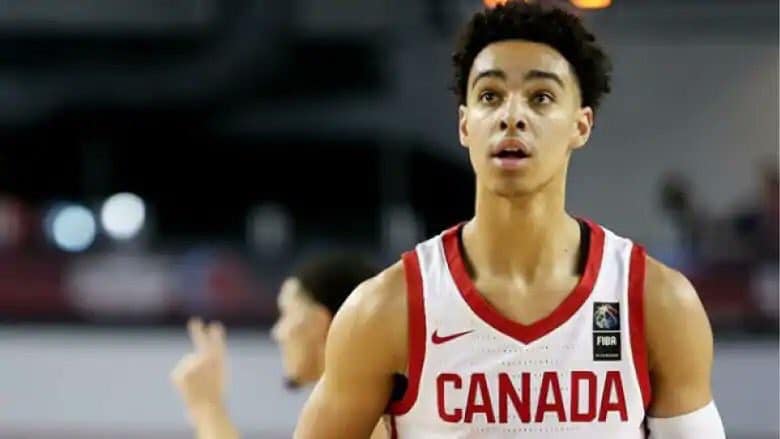 After wowing Florida fans for the duration of last season Andrew Nembhard is earning himself some more supporters within Canada Basketball.

Over the last two weeks the Gators’ point guard has been in Canada’s Senior Men’s National Team training camp, an experience that included two exhibition games against Nigeria. Nembhard played great in the opportunities he was given, most notably in the first contest where he logged 8 points, 2 assists, and 1 rebound in 10 minutes of action. He was particularly deadly working in the pick and roll with Orlando Magic big man Khem Birch but it wasn’t just his well-established passing ability that worked for him.

While Nembhard’s ability as a setup man is unmistakable he wasn’t a dangerous scorer last year which allowed some of the better coaches in the SEC to scheme against him, taking away passing angles and instead daring Nembhard to score. However, that seems to have changed. Canada’s coach Nick Nurse (of the NBA’s Toronto Raptors) mentioned his ability to score.

““He was great, that’s kind of what he’s looked like in practice. He’s kind of a guy that can make plays and create and get his own. He plays with a really good demeanor. He doesn’t play like a young kid and he just kind of does his thing and takes his openings when they’re there.”

This wasn’t the only time I’ve heard about Nembhard’s improved individual offensive instincts. Assistant coach Darris Nichols told me last week his shot making is his biggest improvement and hearing it from both him and an NBA Championship winning coach in Nick Nurse makes me think it’s probably true.

In terms of what’s next for Nembhard there are still lots of opportunities with Canada Basketball if he chooses to take them. They’ve got exhibition games against Australia, New Zealand, and USA later this month and if he makes the final roster he’ll head to China for the FIBA World Championships.

How likely is he to make the final roster for Canada? I think extremely. While Canada started it’s training camp with a lot of NBA talent most of those players have dropped out, especially at the guard position. Jamal Murray (Denver Nuggets), Shai Gilgeous-Alexander (Los Angeles Clippers), and Nickeil Alexander-Walker (New Orleans Pelicans) have all withdrawn from the team and that leaves the squad pretty thin in the backcourt. In Canada’s exhibitions against Nigeria Nembhard backed up former Gonzaga standout Kevin Pangos and it’s quite likely to me that those will be the two point guards in Canada’s rotation. Cory Joseph of the Sacramento Kings remains one of the best players on the roster and although he primarily plays the point in the NBA he was playing away from the ball in the exhibition due to a lack of quality pieces on the wing.

The next question will be if Nembhard does make the final roster will he accept the invitation. Like I mentioned before there would still be a lot of obligations remaining. The exhibitions against Australia and New Zealand are both taking place in Australia which means a whole lot of travel and a whole lot of jet lag, not to mention the FIBA World Championships, the goal of this whole training camp and exhibition schedule, is in China and it’s the first two weeks of September. That’s not exactly an ideal time to be away for a collegiate point guard so he’ll have some tough decisions to make. Let’s remember Nembhard put a lot of minutes on his body last season and while there is definitely better depth at the point this year he’s still one of the best players at his position in all of college hoops and Coach White is going to want him on the floor a ton. When Nembhard was first invited to the training camp he may not have expected to have still been on the roster at this point due to all the NBA talent represented but he now finds himself in the position where he’s trending towards making the final squad.

No matter how long he sticks with Team Canada whether it be another week or all the way until mid-September I think the experience has been a good one. Things started with him playing alongside a boatload of NBA talent and when those pros decided to move on Nembhard became an important player who got to shoulder some responsibility and show just how poised he is for a young player. Playing FIBA rules with a 24 second shot clock (and a 14 second reset on an offensive rebound) he has had to be a playmaker in short clock scenarios which has demonstrated his improved scoring ability.

Nembhard is poised to have a special year of basketball that could very well see a deep NCAA Tournament run and his name called in the NBA draft and if he wanted to add FIBA World Championship experience to that list, I think he’ll have the opportunity.