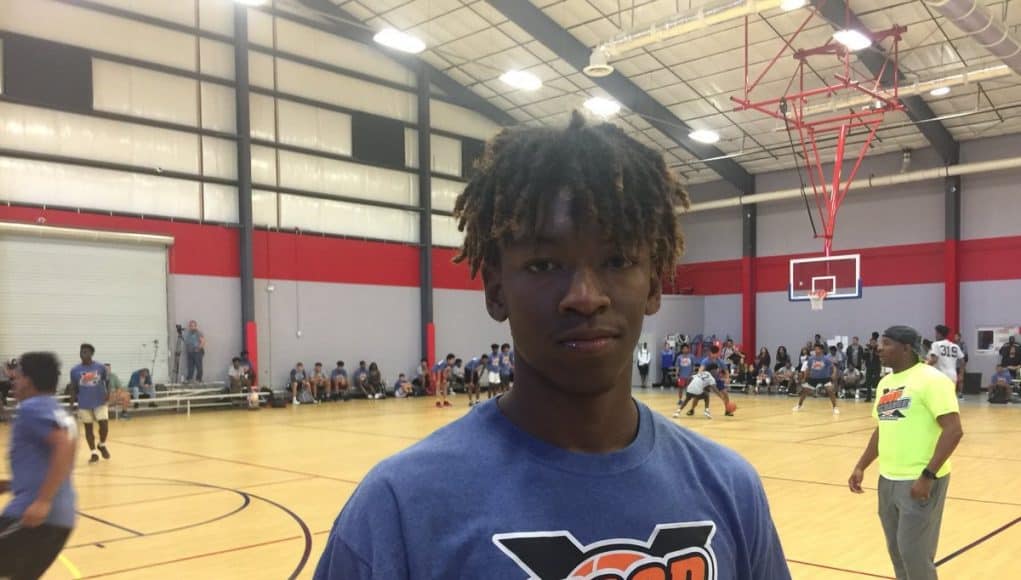 Modern basketball is going through a makeover and the new-look version of the game sees coaches lusting after the most versatile athletes hoops has to offer—long wing players that you can slide seamlessly throughout your lineup. Whether it’s the stars like Lebron James, Kevin Durant, and Kawhi Leonard or role players like Luc Mbah a Moute, Otto Porter, or Jerami Grant, these players are mainstays on most successful basketball teams. You don’t just see this at the NBA level, as Villanova rode the versatility of switchable wing pieces to a pair of National Championships in the short span of three years.

Coach White has joined the trend, targeting a select group of wings he think can play this style of basketball. Most notably is in-state talent CJ Walker, a 6’7”, 180-pound combo forward as comfortable handling the ball in transition as he is catching lobs at the rim. Mostly known for his tireless work ethic, he also possesses a smooth jump shot and most importantly the will to do whatever it takes to win his team games.

Ranked the 85th player in the class of 2019 and currently playing in Orlando the Gators are predictably in the hunt for the forward’s talents. I was able to catch up with CJ to learn more about him and talk about how he sees the game. Here’s my interview with fast-rising 2019 recruit CJ Walker.

EF: Hey CJ! Thanks so much for taking the time to talk to me today. First off, why don’t you tell everyone where you’re from and where you play basketball.

CJW: I’m CJ Walker, Combo Forward, originally from Queens, New York but we moved to Sanford, Florida when I was in the 6th grade so I feel like I have two cities who are pushing for me to be successful. I currently play basketball at Orlando Christian Prep and play for E1T1 on the EYBL circuit.

EF: You’ve gotten to live in two places that are known for great basketball talent, which is a really cool upbringing. How have the first two weekends gone for E1T1 on the EYBL circuit and how do you feel like you’ve performed personally?

CJW: Yes, Queens and Sanford are both great cities with great folks, the best of both worlds. First two live periods were OK, we should have finished and closed games out but as one of the leaders on the team I’ll take the fall for that because I have to do better myself when it comes to closing out games. I improved each session which was my main goal.

EF: Good for you to improve and also good for you for showing the maturity to take some of the responsibility for some tough losses. From an outsider’s perspective, you seem like an outstanding teammate. From your unselfish play on the court to petitioning on Twitter for Division-1 coaches to check out some of your under-recruited teammates, you seem like an awesome guy to play with. Why is being a great teammate so important to you?

CJW: It’s how I’ve been raised by my parents. I love helping people and putting a smile on them…I want all my teammates to get an opportunity to play at the next level.

EF: That’s awesome CJ, I think that is really cool. When I see you play on the court, I see modern basketball. You have prototypical size for a wing and are the kind of player every coach desires. You’re also the kind of player the Gators didn’t have on the roster last season. Why do you think players like yourself are so important to the modern game?

CJW: I think the Warriors have opened the door for a player like me, position-less player…coaches are looking for the next Draymond (Green) so that’s the role I’ve embraced which is positionless.

EF: It makes sense to emulate yourself after a multiple-time champion. Though I think you smile on the court way more than he does! (laughs). You have a ton quality offers and could go play for a lot of elite college teams. What are you looking for most in a team when thinking about your college decision?

CJW: Yeah, I definitely smile more than Dray… Relationship, coming in and making an immediate impact, skill development, player’s coach, open offense, press on D, and a coach willing to work with me through my mistakes.

EF: All great factors to consider. You are very well suited to high-pressure, pressing defenses and I’m sure you’re be a valuable tool within that defense with a team. You also mentioned skill development. What is a skill you have right now that you think is ready for the college level and what is something you think you need to work on to prepare for the next level?

CJW: High motor is my major asset… I need to continue to add weight, be more consistent at the free throw line and the three-point line, improve my handle, and improve my decision-making.

EF: The skills you mentioned can be developed but you can’t teach a high motor so it’s a great thing you have that. You mentioned relationship with the coach being big in your college decision. Who has been the most influential coach so far in your basketball career and why?

CJW: It’s got to be my right hand man who has been my coach since the 6th grade…he has been there every step of the way. He handles all my training, AAU stuff, interviews and recruiting (him and my dad). I’m always with him no matter where I am. We have a great relationship and I trust him 100%, and so does my parents. Some folks don’t like him because he keeps from having a lot of folks in my ear which is why not too many people can actually get a hold of me, and if anyone tries to go behind his back I tell him anyways. He runs a tight ship with me but he also allows me to be a kid still.

EF: It’s great to have good counsel and I’m glad you have someone like that in your circle. Away from the court, what are your biggest hobbies and passions?

EF: (laughs) Always got to have your phone! What video games are you into these days?

EF: Thanks so much for the conversation! I have really enjoyed getting to know you better. Last questions, alongside the gaming note… say you’re player a regular game of Fortnite…where are you dropping?

CJW: That’s top secret bro, can’t share that (laughs) but I really appreciate you taking the time out for me.
EF: (laughs) That is awesome. I respect a gamer who keeps his strategies close to the vest! (laughs). It was a pleasure talking to you and I’m looking forward to following you the rest of the spring! Take Care CJ!