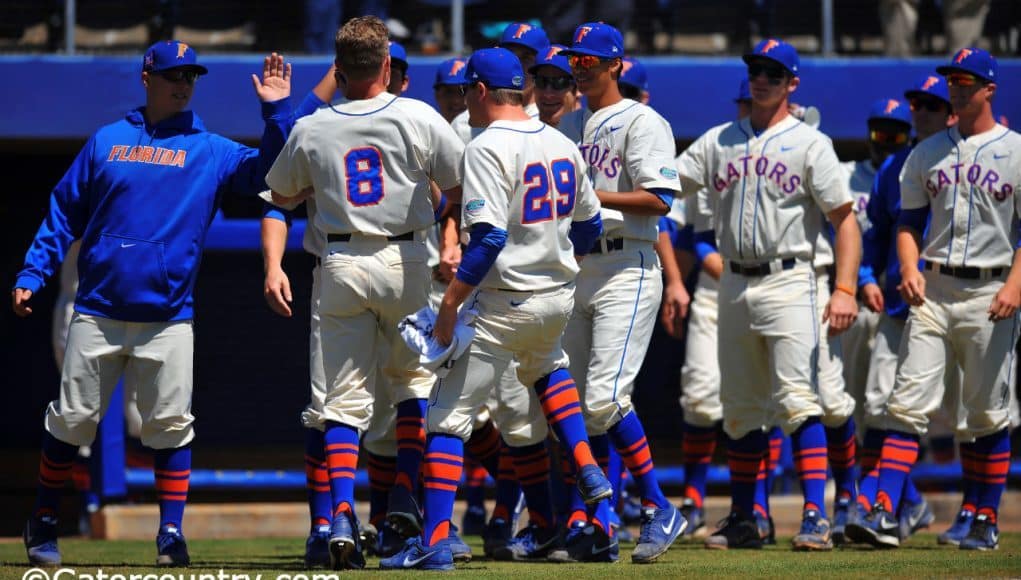 Motivated by the threat of getting swept on the road, Georgia came out swinging in the top of the first scoring a run in the opening frame when Nelson Ward’s single plated leadoff man Stephen Wrenn.

Florida wouldn’t sit around and let Georgia enjoy the lead, the Gators struck back in the bottom of the inning with three runs of their own. Casey Turgeon led the game off with a single down the left field line. Richie Martin was hit by a pitch while trying to sacrifice bunt Turgeon over to second, giving the Gators two men on and no outs. Harrison Bader smoked a ball to the wall in right-center for a triple and a 2-1 UF lead. Braden Mattson’s sacrifice fly two batters later extended the lead to 3-1.

Florida wasn’t done. After giving up a double to start the second, Danny Young struck out two and fielded his position well to get out of the jam. The Gator bats went back to work. John Sternagel and Turgeon both walked to start the inning and Richie Martin reached on an error trying to sacrifice bunt the duo up 90-feet. With the bases juiced, Bader knocked in his third RBI of the day with a bases loaded single. Taylor Gushue singled through the left side, scoring Martin and Turgeon and giving the Gators a hearty 6-1 lead. Following a Braden Mattson sacrifice bunt, freshman Peter Alonso put one more on the board with a sacrifice fly to center.

“When you score seven runs in the first two innings, I think obviously, that gives you a lift,” O’Sullivan said after the game.

The barrage of runs that forced the first two innings to take more than an hour to complete subsided and the pitching staffs regained some semblance of order for two innings.

Georgia broke the no-scoring peace treaty when Ward singled through the right side to score Conor Welton. As they did in the bottom of the first, Florida would respond to Georgia runs with some of their own.

Mike Fahrman (making his first start of the season) worked a walk to start the inning. After Buddy Reed and John Sternagel both grounded out, Casey Turgeon hit his fourth home run of the season, tying Gushue for the team lead and gave the Gators a 9-1 advantage.

Florida and Georgia would both tack on runs in the seventh inning but the Gators would hold on to their lead, take the Sunday finale and complete the sweep of Georgia.

“It feels amazing,” sophomore outfielder Harrison Bader said. “Winning the first two games is part of the challenge but an even bigger challenge is win that third game. I’m glad our pitchers did their job and we did our job too. It was a great win.”

The sweep extended Florida’s lead over Georgia to 4.5 games in the SEC East and Florida maintained their position as the top-ranked team in the SEC East, gaining a game on second place South Carolina.