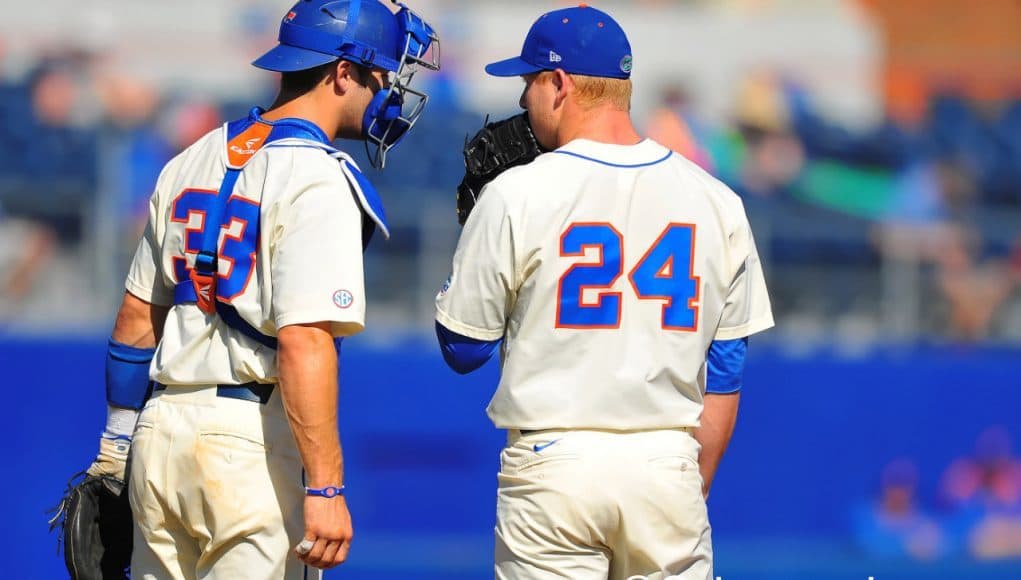 GAINESVILLE — The No. 12 Florida Gators (27-14) watched their winning streak end at the hands of the Jacksonville University Dolphins (14-25) 3-1 on Tuesday night.

Karsten Whitson earned the start on this night, his first since April 1, of this year and threw a gem. Whitson lasted five innings gave up just three hits while striking out a season high five batters. The five strikeouts were the most that the former ninth overall selection in the 2010 MLB Draft has thrown since he pitched as a freshman against Vanderbilt in the College World Series.

“I thought Karsten threw really good,” Kevin O’Sullivan said after the game. “He did everything that I had hoped for and that’s the disappointing thing. It’s been a tough road for him, he comes out tonight and throws as good as he’s thrown in a while and I was just hoping that our guys would rally around him and bee a bit more motivated at the plate.”

As good as Whitson was he could neither outlast nor outshine the performance from Jacksonville starter Justin Russell, who threw seven innings of one-run baseball to lead the Dolphins to a victory.

“Credit those guys, the starting pitcher did a heck of a job,” said O’Sullivan. “[He] held us to three hits over seven. All the credit goes to him.”

Zack Powers got Florida on the board in the bottom of the second with a solo home run that squeaked past the padding in right field under the scoreboard. The home run was the second of the season for Powers but was just about all the offense Florida would be able to muster on the night.

“I think it was a fastball up, just reacted on it,” Powers said after the game.

A pitching duel ensued after the home run with the game flying by all the way to the seventh inning. Florida and Jacksonville were on pace to finish the game in just over two hours before Whitson was pulled and reliever Ryan Harris got into a jam.

Harris threw 2.1 innings, surrendered three runs (all earned) and never looked sharp on the mound. Miscommunication with Taylor Gushue caused the catcher to come out and go over signs with his pitcher on Harris’ very first batter of the game.

With one out in the seventh inning, Harris plunked Michael Babb and Alex Seifert to put the tying run in scoring position. A sac bunt moved both runner into scoring position before Harris would leave a fastball up in the zone, allowing nine-hole hitter Dylan Dillard to deposit it deep into the left field bleachers.

The three-run blast was all the scoring that Jacksonville would need as Florida was only able to muster up four hits all evening.

A sizeable contingent of Dolphins faithful made the trip out to the park and the team received a nice ovation after the game. Dillard and his teammates took time to recognize their fans who made the trip to hostile territory and enjoyed being able to knock off what he called one of the “big dogs” in the state.

“Definitely, especially coming off of [a loss to] Florida State,” Dillard said. “We wanted to at least knock one big dog off.”

Florida will host Florida A&M tomorrow night at 7 p.m. The game will be televised on Fox Sports Florida.