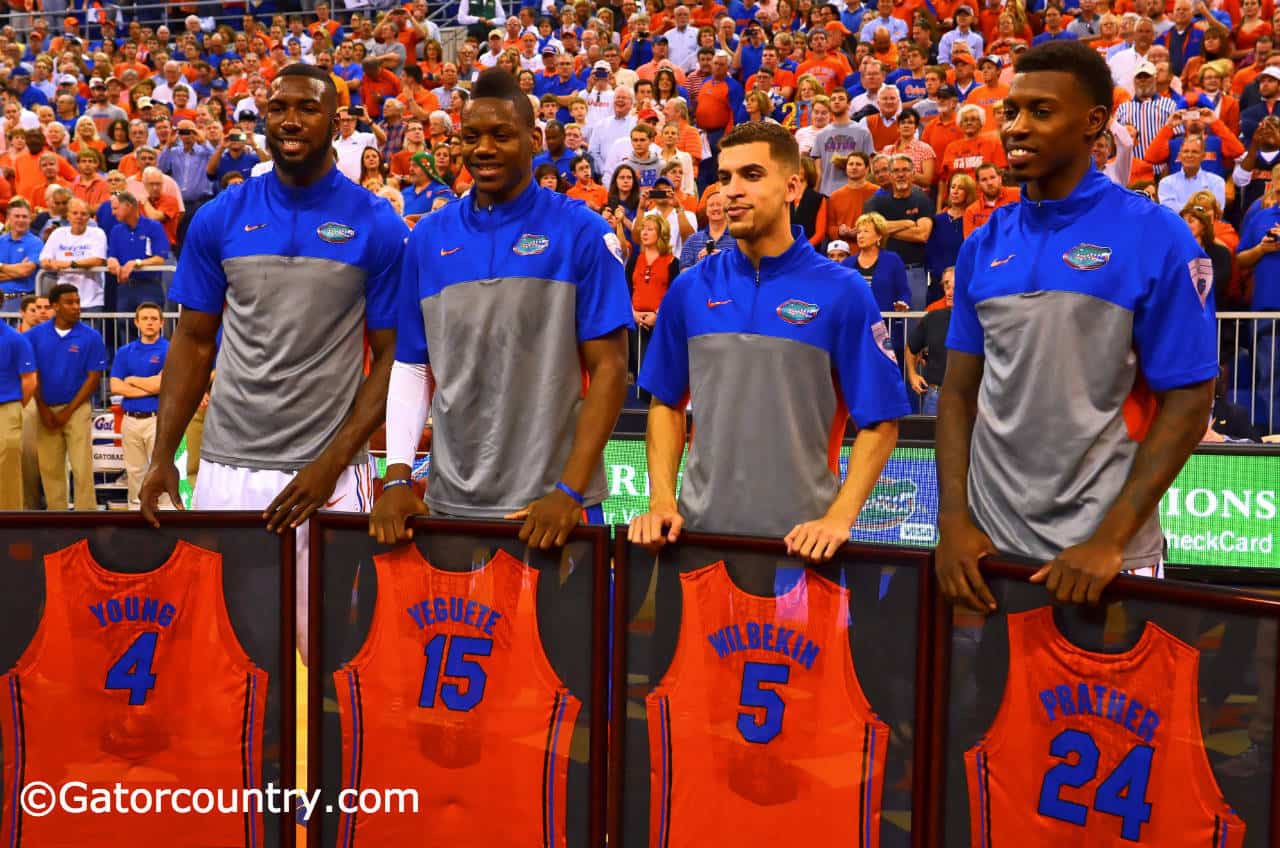 A few thoughts to jump start your Saturday morning.

THE SYSTEM AT ITS ABSOLUTE BEST

Patric Young, Scottie Wilbekin, Will Yeguete and Casey Prather are graduating from the University of Florida this weekend. They came to Florida together and they leave together, all four earning their college degrees in four years and all four with stories to tell about how they overcame obstacles both on and off the court and how they grew more as human beings than they did as basketball players.

They leave Florida as the most successful senior class in school history. In their four years the Gators won a school record 120 games, made it to the Elite Eight game three consecutive seasons and then capped off their careers with a trip to the Final Four. As seniors, they led the Gators to 30 straight wins, another school record. Scottie Wilbekin, a two-time All-SEC Defensive Team selection, was the SEC Player of the Year and made several All-America teams. Casey Prather made first team All-SEC and made the John Wooden All-America Team. Patric Young was this year’s SEC Defensive Player of the Year and was the SEC’s Scholar-Athlete of the Year three straight years. If they gave out an award for toughness, Will Yeguete would win it for sure. Has there ever been a player at Florida more willing to do the dirty work?

For all they accomplished on the basketball court, all four had major hurdles to overcome in their journey to this next step in life.

Patric Young always thought he was a team player until Billy Donovan challenged him to take a good long look, evaluate himself and then see what needed to change. Patric realized that he could get in better physical condition and play through fatigue. He also realized that unless he gave a maximum effort, he couldn’t expect teammates to follow suit.

Scottie Wilbekin got suspended as a junior and then got kicked off the team last spring. Billy Donovan shoved signed transfer papers across the desk at him. Scottie shoved them back and told Donovan he wanted to stay and would do anything Donovan required to be a part of the team. Donovan’s punishment might seem Draconian, but by making Wilbekin walk the finest of lines with no margin for error, a boy became a real man and became the best basketball player in the Southeastern Conference.

Casey Prather listened to everyone else tell him he had to become a jump shooter if he wanted to be a successful college player. He tried that for two years and it didn’t work. He thought hard about transferring but his three buddies (Young, Wilbekin and Yeguete) wouldn’t let him. As a junior he found his niche as a slasher off the bench but he battled one injury after another. As a senior he started for the first time. He had to battle through ankle and knee problems but played through his injuries to make first team All-SEC and All-American.

When Yeguete broke his foot as a sophomore, he begged Donovan to let him play through the pain rather than undergo surgery. Donovan won that argument, but Yeguete would have done it. Playing and winning and not letting teammates down was that important. He suffered a knee injury as a junior with games to go. He needed surgery but elected to have minor surgery that gave him a chance to come back and play again during the season rather than the major surgery that he would have in June. The major surgery was microfracture. For every player who has come back from this type of surgery, there are two whose careers all but ended. Yeguete came back to play and start every game as a senior, setting a standard for toughness that nobody may ever surpass.

Patric, Scottie, Casey and Will leave Florida with a full legacy of accomplishment both on and off the court. They are the poster children of what you get when the merger of college sports and education works the way it’s supposed to. For all the talk recently about how “the system” has failed so many athletes, they stand as proof positive of what happens when it’s done the right way.

MAKE THAT NINE SEC WINS IN A ROW

The 12th-ranked Gators (31-15, 16-6 SEC) rallied for one run in the seventh, three in the eighth and added an insurance run in the ninth Friday night as they took down Alabama (30-16, 13-9 SEC) in the first game of a critical weekend series in Tuscaloosa. In picking up their ninth straight SEC win, the Gators maintained a two-game lead over Ole Miss (34-13, 14-8 SEC) and stretched their lead to three over Alabama in the race for the SEC regular season championship. With South Carolina (34-12, 12-10 SEC) dropping a 3-1 decision, the Gators now hold a four-game lead in the SEC East. The Gators got a 3-4 performance from Casey Turgeon, who drove in a run; a 2-4 from Harrison Bader, who drove in two, and two RBI on a pair of sacrifice flies from Taylor Gushue. Logan Shore (6-2) got the win with six innings of five-hit, shutout baseball. The Gator can clinch the series today when Aaron Rhodes takes the mound against Alabama in a 4 p.m. game televised by CBS.

The 3rd-ranked Gators (16-2) advanced to Sunday’s championship game of the American Lacrosse Conference in Evanston, Illinois with an 11-6 win over Johns Hopkins. Shannon Gilroy led the Gators with four goals and Mary Sean-Wilcox came up with 10 saves in goal. The Gators will face Northwestern in the championship game at 12 noon … The 7th-ranked Gators (43-10, 13-9 SEC) took game one of their weekend softball series with Arkansas in Fayetteville behind three home runs and the 10-strikeout pitching of Hannah Rogers (22-8). The Gators got solo homers from Bailey Castro and Taylore Fuller along with a three-run homer from Brianna Little. Leadoff hitter Kelsey Stewart went 3-4 for the day.

The question for today comes from Jake T. in Naples, who asks, “You wrote that Florida could go 6-6 and still be the most improved team in the SEC because the schedule is so tough. What’s so tough about the schedule and is there any way CWM survives 6-6?

Okay, I’ll start with the schedule. The Gators should start out 3-0 with wins at home over Idaho, Eastern Michigan and Kentucky. The next seven games the Gators will either be underdogs or pick’em. They will be huge underdogs at Alabama, pick’em on the road in Knoxville against Tennessee, underdogs at home on consecutive weeks against LSU and Missouri, pick’em or underdogs against Georgia in Jacksonville, pick’em on the road at Vanderbilt and underdogs at home against South Carolina. Eastern Kentucky comes to town on November 22, which should be a guaranteed win since EKU is Division IAA, but we saw what happened last year. Then there is Florida State in Tallahassee. Alabama, South Carolina and Florida State are all top five teams. LSU is top 10 and both Missouri and Georgia are top 20 and could crack the top 10. I think the Gators are better than Tennessee and Vanderbilt, but those are road games and there is no such thing as an easy roadie in the SEC. I think 6-6 or 7-5 is realistic, 8-4 is do-able and 9-3 or 10-2 could happen if the stars and planets align. If the offense puts up points at a remarkably improved rate and the Gators are competitive and exciting, Will Muschamp will most definitely survive 6-6 or 7-5.

Al Kooper is best known for starting Blood, Sweat and Tears but by the time he put that band together he was already a legend in the studio where he worked with the Rolling Stones, B.B. King, The Who, Jimi Hendrix and Cream. He did one album with Blood, Sweat and Tears (“Child Is Father to the Man”) then went out on his own. He teamed up with Mike Bloomfield and Stephen Stills to record “Super Session” and with Bloomfield for a very cool album called “The Live Adventures of Mike Bloomfield and Al Kooper” plus played some with Lynyrd Skinner. On his own, he put out 12 albums including the very cool “Easy Does It.” This 1970 release featured Kooper on piano and vocals in a great rendition of the Ray Charles standard “I Got a Woman.” The piano intro on this song is really incredible and there is a nice sax solo by Fred Lipsius there at the end.