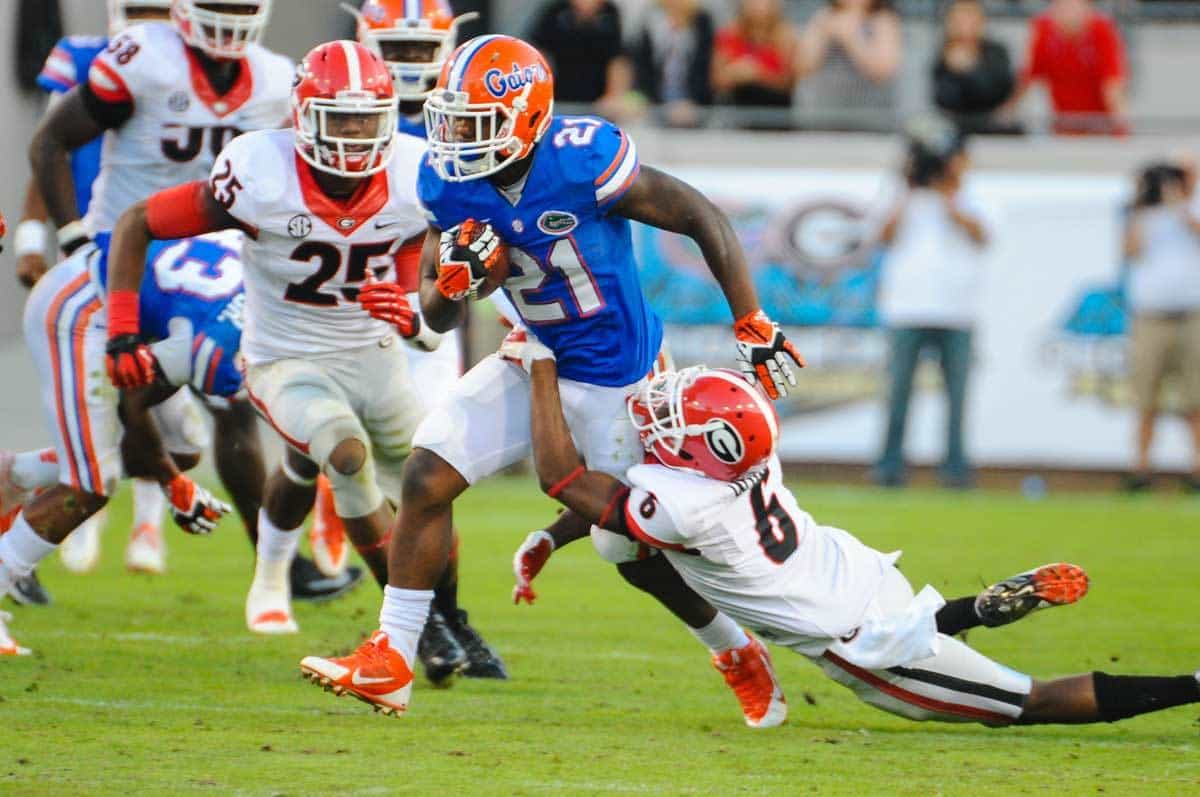 A few thoughts to jump start your Friday morning.

IN THE IMMORTAL WORDS OF RIC FLAIR

At the height of his pro wrestling career, The Nature Boy once stated “In order to be the man, you have to beat the man.” That’s a pretty good philosophy that maybe the coaches in the Pac-12 should adapt rather than whine about the Southeastern Conference and its decision to stay with an eight-game schedule.

To go with a nine-game schedule, the SEC would have had to interrupt some of the long-standing inter-division rivalries such as Auburn-Georgia and Alabama-Tennessee, plus it would make it very difficult for Florida-Georgia to continue in Jacksonville because the imbalance – Florida and Georgia would have years when they only had three home SEC games – would cause scheduling problems. So, Mike Slive and the league’s athletic directors made the choice to stay with the eight-game schedule.

But listen to a few of the Pac-12 coaches:

Jim Mora (UCLA): “I think the Pac-12 is an incredibly competitive conference. I look at the teams that make up this conference and I think anybody can beat anybody on any given week. I think the same can be said for the SEC. And yet we play nine games against each other. I like that. I think we like that as a conference and I think we take pride in that because we’re interested in competing against the best week in and week out. We try not to schedule too many patsies.”

Mark Helfrich (Oregon): “If we’re going to call anything equal and everybody pointing in the same direction as far as a playoff, it seems like the qualification for that playoff should be equal. We’re a long way from that with a few leagues. We can’t do anything about that …”

“There’s no taking away anything that LSU and Alabama and Auburn recently have accomplished,” Shaw said. “They’ve been phenomenal. My take is to say, ‘Okay, the rest of us are playing our conference. We’re playing nine out of 12 teams in our conference. Why can’t you do the same thing?’

The Pac-12 doesn’t have the rivalries nor the rabid fan bases of the Southeastern Conference. Auburn-Georgia may not mean a thing to someone in Eugene, Oregon or Palo Alto, California, but preserving the oldest rivalry in the south means something to fans in the SEC. They have nothing at all like Florida-Georgia in the Pac-12.

The reason the Pac-12 needs to play nine conference games isn’t about being competitive. It’s about revenue. In a league where only four of the 12 teams play in stadiums larger than 67,000-seat Commonwealth Stadium in Lexington, Kentucky (the 11th largest in the SEC), playing nine conference games makes more sense because the rivalries aren’t nearly as old nor are they as intense.

What the Pac-12 needs to concentrate on doing is matching the Southeastern Conference product on the field. When the Pac-12 has won seven of the last eight national championships – actually when they’ve won one in a row – they can talk. Until then, zip it.

EASTERN MICHIGAN-FLORIDA WILL BE ON SEC NETWORK

The new SEC Network is already paying dividends for the Florida Gators and it doesn’t even debut until August. The Gators will debut on the SEC Network on September 6 when Eastern Michigan comes calling. Typically, if the Gators were playing a team that has a 16-164 record since 2000 you would expect to be testing your resolve against sun stroke at high noon. Thanks to the SEC Network, that game will be played at 4 p.m. It will still feel like a blast furnace, but your chances of sun stroke will probably diminish by about 60%. The Gators will also play Kentucky on September 13, another game that might be a candidate for a 12 noon start, but it will kick off at 7:30.

With only three weekends remaining on the SEC baseball schedule, the 12th-ranked (USAToday) Gators (30-15, 15-6 SEC) can tighten their grip on the top spot in the Southeastern Conference when they pay a visit to Tuscaloosa to face 20th-ranked Alabama (30-15, 13-8 SEC) for a critical three-game series. The Gators hold a three-game advantage over 7th-ranked South Carolina (34-11, 12-9 SEC) in the SEC East and they lead Bama and #16 Ole Miss (33-13, 13-8 SEC) by two games in the race for the SEC regular season title. The Gators go into the weekend with an eight-game winning streak in SEC play. In tonight’s game (7:30 start, CSS Television), the Gators will go with freshman Logan Shore (5-2, 1.76 ERA) against Alabama ace Spencer Turnbull (5-3, 2.45 ERA). The Gators are ranked #5 in the Baseball America poll, #8 in Collegiate Baseball and #14 in the National College Baseball Writers Association.

The 3rd-ranked Gators (15-2) face #8 Johns Hopkins (15-3) in the semifinals of the American Lacrosse Conference Tournament played at Northwestern University. The Gators hold a 10-9 regular season win over Hopkins … The women’s tennis team (19-5) starts play in the NCAA Tournament today against South Carolina State at the Ring Tennis Complex. The Gators are seeded #8 in the 64-team field … Saturday, the men’s tennis team (15-9) will face St. John’s at the Ring Tennis Complex in the first found of the men’s NCAA Tournament. Florida is seeded #14 in the 64-team field.

The NBA Board of Governors held a vote by teleconference Thursday and all 10 members voted in favor of removing Donald Sterling as the owner of the Los Angeles Clippers. The vote now goes to the other 29 owners of the league where 75% have to vote in favor of removal for Sterling to lose the franchise he has owned since the 1980s when he purchased the team for $12.5 million. Forbes Magazine rates the franchise value at $575 million. Once Sterling is removed, potential owners of the team include Magic Johnson and Oprah Winfrey.

Now that Mike D’Antoni is officially out as head coach of the Los Angeles Lakers, the courtship of John Calipari will begin. A lot of NBA sources think Calipari is the guy the Lakers want because of friendships with potential free agents LeBron James and Carmelo Anthony that were brokered through World Wide Wes. This bears watching since Calipari is the chief reason Alex Poythress, Willie Cauley-Stein, Dakari Johnson and the Harrison twins all came back for one more year at Kentucky. Cal might indeed stay at Kentucky, but if the Lakers offer something in the neighborhood of $10-12 million, as it is rumored they will, it might be too great of a temptation. Backup plan for the Lakers is UConn’s Kevin Ollie.

HOW QUICK IS JEFF TEAGUE OF THE ATLANTA HAWKS?

Mark Schalbach of ESPN.com knows. Is there any doubt who Schlabach was talking about Thursday night when he tweeted:
‏‪@Mark_Schlabach

Jeff Teague is quicker than a dude running out of Publix with….

The question for today comes from Ryan Bell, who asks, “If you believe providing additional benefits to student athletes – benefits not provided to your average student – is warranted, won’t that just exacerbate the entitlement problem? How does handing out even more freebies to coddled athletes increase their accountability? Perhaps the NCAA should provide a monthly stipend of shellfish so that poor athletes are not forced to steal it? Because every other college student eats crab legs for dinner.

You’ve heard that old saying: Be careful what you ask for. This is definitely going to be one of those situations for college athletes. They want a say in how they are treated and rules that will affect them in the future. They want some sort of financial stipend and guarantees of medical coverage after their playing days are through and guarantees their education will be paid for even after their eligibility is completed. Although they’re likely to get all those things when the five power conferences form their own division of the NCAA, you better believe the extra benefits won’t come without a price. The price will be greater accountability for their actions. Not every school in the power conferences is flush with cash, but whether it’s a rich school or one just struggling to keep the books balanced, the attitude will be if we’re going to be required to spend more money on you, then you have to accept the responsibility and act like an adult.

Long before she made her debut with the sensational CD “Come Away with Me,” stardom was predicted for Norah Jones, whose father was the great Indian sitar legend Ravi Shankar. Nobody expected that she would make such a big splash on her first recording, however. “Come Away with Me” won eight Grammy awards including album and record of the year for “Don’t Know Why.” I love “Come Away with Me” and “Don’t Know Why” but the song I like best is her remake of the old Hank Williams classic “Cold Cold Heart.”