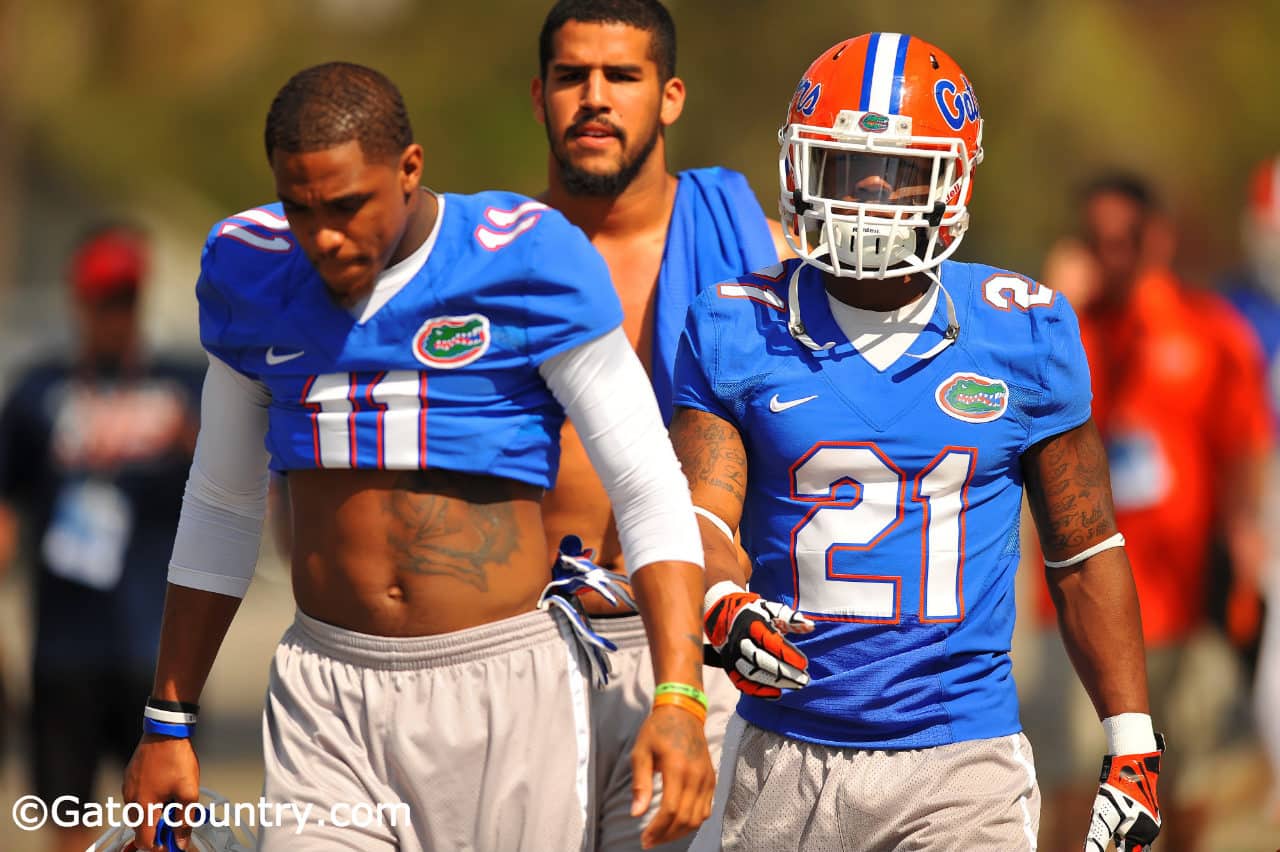 A few thoughts to jump start your Tuesday morning.

Aesthetically, spring football was an unqualified success from an offensive standpoint. Kurt Roper painted a very pretty picture with his up tempo, no huddle offensive attack that certainly was more inspiring than anything we’ve seen in Gainesville since 2009. Roper certainly lived up to the reputation he earned at Duke, that of a patient teacher who not only understands how to dissect a defense but knows how to get through to the kids he’s coaching. But spring football was the easy part. The hard part will be finding the right fit at each position so that the Gators have their best 11 players on the field in the fall. If there was one constant in the previous three seasons it was that feeling that all 11 Gators weren’t always on the same page when they took the field or that the Gators always had their best 11 out there. There were far too many mental breakdowns and that was compounded by a lack of discipline on the offensive line. With Roper and his hand picked line coach, Mike Summers, you get the feeling that this team will know its assignments and do a far better job in execution in the fall. It’s also easy to see why players like Roper so much. They know that if they’re on the field they’re going to get the ball. This isn’t just a quarterback friendly offense; it’s a receivers and running backs friendly offense. And the offensive linemen have to love the fact that the quarterbacks are going to get the ball out of their hands so they don’t have to hold their blocks forever. Yes, this is only spring but there is no escaping the feeling this offense will be immensely improved in the fall. Trending: Up

The silly season for professional basketball has begun, which means every decent college basketball coach will be rumored to be leaving for an NBA job. Two weeks ago it was John Calipari to the Lakers. Hasn’t happened yet, but that one would actually make more sense than the one that came out Monday – the Minnesota Timberwolves have targeted Billy Donovan to replace Rick Adelman, who retired. In the immortal words of Dennis Hopper as Deacon in the film stinker “Water World”: “There’s two chances that’s gonna happen – no way and no how.” Although he will never say never, Billy isn’t going anywhere at least for now. For one thing, he’s got the Gators in a perpetual reload mode and poised to follow up the success of this year’s Final Four team with a run of outstanding teams that will be in the hunt for the NCAA title every year. Second, oldest son Bryan is still I high school and youngest daughter Connor is a 12-year-old middle schooler. Maybe after all the kids are finished with high school Billy will take a look at the pros, but for now, don’t count on him coaching anywhere but at Florida for awhile.

In a speech at the University of Massaschusetts where he is the Executive in Residence at the Mark McCormack Department of Sports Management, Southeastern Conference commissioner Mike Slive outlined the seven goals of the five power conferences (SEC, ACC, Big Ten, Big 12 and Pac-12) that will make up a new subdivision of Division I that is expected to come into existence in August. Slive says the priority of the power conferences will be to put the student-athlete first. The seven goals are:

1. Provide the full cost of attendance to scholarship athletes.
2. Completely fulfill health, nutrition and safety needs of all athletes.’
3. Allow students who are out of eligibility to complete their degree at no cost.
4. Reduce the tension between agents and advisers so athletes can get better draft information.
5. Find a way to get more balance in the lives of student-athletes; i.e., something better than the current 20-hour rule.
6. More and better assistance for academically at-risk student-athletes.
7. Give student-athletes both a role and a vote in NCAA rules and policies that affect them.

MORE REASONS WHY I HATE THE BOWL SYSTEM

Florida State’s trip to the BCS National Championship Game at the Rose Bowl came with a price. Technically speaking, FSU and Auburn were paid $23.9 million for their appearance, but by the time expenses were paid (FSU had to bring the band out, all 67 zillion Marching Chiefs; the horsie and someone to shovel after the horsie, etc.) and the money was pooled by the ACC and split up equally among the conference schools, FSU lost $481,000. This isn’t unusual. Florida lost a ton of money for the 2012 Sugar Bowl trip. About the only way a team makes any money on a bowl is if it’s an independent or it’s playing a game just miles from its own campus. Bowl teams are required to buy a very large allotment of tickets and if they don’t sell them, they eat the cost. And that’s just the start of things. It gets worse and by the time the bowl trip is over, the school that is being “rewarded” is swimming in red ink. All this and now we’re getting another bowl game in Orlando. That will be 40 bowl games this year, which means that two-thirds of all the teams in Division I will be playing an extra game, which means a whole bunch of 6-6 or 7-5 teams will be rewarded for their mediocrity.

If Dak Prescott ran Gus Malzahn’s offense at Auburn he would be a household name already, but because he’s at Mississippi State, where they have to pump in the sunshine because it’s so remote, he’s sort of off the radar. He shouldn’t be. He might very well be the best quarterback in the Southeastern Conference. He might be the closest thing Dan Mullen is ever going to get to another Tim Tebow, but there are two distinct differences – Prescott is right handed and he’s far more developed as a passer. Now, if he can just refine a few things in his throwing motion, he could put up some astronomical numbers in 2014. He will get plenty of help at the Manning Academy where he will be under the watchful eye of Archie, Peyton and Eli. This guy is the real deal. As a sophomore last season he threw for 1,940 yards and 10 touchdowns while rushing for 829 yards and 13 more scores while missing two full games and part of another due to injury. If he has the kind of season he’s capable of having, Mississippi State will be the surprise team in the SEC West.

Maybe the $64,000 question is when is the last time Tennessee hired a coach for a major sport on its first try? However long that streak is, it stayed intact Monday when Louisiana Tech coach Mike White decided he’s better off in Ruston, Louisiana than Knoxville, forcing UT athletic director Dave “Spanky” Hart to go with an alternate plan. Unlike the last three football coach hires – Lane Kiffin, Derek Dooley and Butch Jones were all Plan Z guys – or the former hoops coach Cuonzo Martin, who got the job after at least six others said no, Donnie Tyndall of Southern Miss is only a Plan B. Tyndall is a former LSU assistant who was 114-84 in six years at Morehead State where he got the Eagles into the 2011 NCAA quarter-finals and 56-17 in two years at Southern Miss with two trips to the NIT. It’s going to be interesting. Cuonzo Martin recruited a team of grinders. Tyndall’s style is run, run, run and run some more.

AND WHAT DOES THE MIKE WHITE NO SAY ABOUT UT?

They will be spinning Donnie Tyndall as a fabulous hire in Knoxville and who knows? Maybe he is the answer. But what does it say about the UT athletic department that Mike White would rather stay at Louisiana Tech than take the job at Tennessee? Ruston is not the end of the world (that’s about 20 miles from Manhattan, Kansas) and even though locals consider it to be the Harvard of Lincoln Parish, Louisiana Tech is never mentioned as one of those hallowed halls of learning. The men’s basketball program did produce Karl Malone but it’s better known for women’s basketball.  But Mike White would rather stay there than go coach at Tennessee. The picture that paints of the University Tennessee athletic department is not flattering.

Today’s question comes from Larry Kleinfeld, who asks, “On account of its basketball success, UF has received a great deal of newspaper and general media publicity in recent weeks.  Everyone has been talking about the Gators, who are in fashion at the moment.  Winners are attractive.  Do you think that big basketball splash will help or has helped with football recruiting (multisport cross-fertilization, as it were)?

I have always felt that Florida recruiting has benefitted from the great relationships between the football coaches and Billy Donovan starting with Steve Spurrier, who became one of Donovan’s best friends and biggest supporters. Spurrier always believed that a good basketball program and a packed O-Dome had a positive effect on football recruiting. On his Gator Club tours, Urban Meyer regularly lauded Donovan for the job he was doing and talked about how it helped him with recruiting. Will Muschamp has carried on that tradition. He’s brought recruits over to the basketball offices to meet Donovan and regularly uses Donovan to make motivational speeches for his football team. I know at a lot of schools the football and basketball programs seem to be in competition with one another, but that’s not the case at UF. Football and basketball don’t co-exist; they feed off each other.

In 1971, Laura Nyro cashed in on her friendship with Patti LaBelle by taking Patti and her two vocal partners (the three were the vocal group LaBelle) on the road with her to record the album “Gonna Take a Miracle.” A prolific songwriter, Nyro wanted to do an album of other people’s music and the result was a stunning, soulful compilation that featured Nyro’s very distinctive lead vocals and incredible backup vocals by LaBelle. I have always loved this rendition of Marvin Gaye’s old hit, “The Bells.”