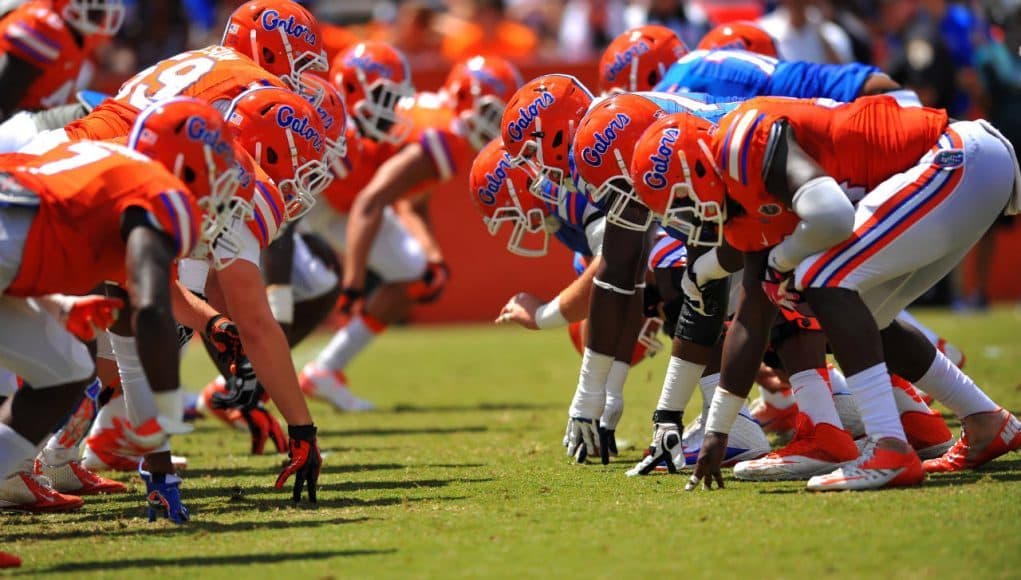 A few thoughts to jump start your Easter Sunday morning.

Clutch! That’s all you can say about Florida’s gymnasts, who pulled off a near-miracle comeback on the floor to tie front-running Oklahoma for the NCAA Gymnastics Championship, the second straight year the Gators have claimed the national title. When Oklahoma scored a strong, 49.550, on the vault in its final rotation the Gators had to come up big on the floor. After consecutive 9.90s by Rachel Spicer and Alaina Johnson, Bridget Sloan was good for a 9.925 followed by consecutive 9.950s by Kytra Hunter and Bridget Caquatto for a 49.625 on the event, bringing Florida into a tie with the Sooners for the championship. The Gators turned in solid performances on the vault (49.450), the beam (49.500) and the uneven parallel bars (49.600) leading up to the dramatic finish on floor. Sloan had an incredibly good night, scoring 9.90 on the bars, 9.925 on floor and 9.950 on the beam and floor. One judge scored Sloan’s beam routing a perfect 10. Hunter also had 9.950 on the floor (one judge scored a 10) and vault and Bridget Caquatto had 9.950 on both beam and floor.

The tackles are better. At least we think so. Since rush ends like Dante Fowler Jr. and Bryan Cox Jr. had to hold up because (a) quarterbacks were wearing non-contact jerseys all spring and (b) the idea was to excite the crowd with offense so the pass rush was scaled back in the Orange and Blue game, we really don’t know just how much tackles have improved. We do know this: D.J. Humphries and Chaz Green have a lot of experience. How well that translates to SEC play remains to be seen. Humphries is still undersized at 290ish and Green has struggled in the past with speed off the edge. Behind them are Trenton Brown, who has locked down the right guard spot but would slide to right tackle in the event of an injury, and kids like Kavaris Harkless and Nolan Kelleher. Highly touted David Sharpe arrives in the summer. What was apparent this spring was more discipline under new offensive line coach Mike Summers. There were only two false start penalties (both by newbies) and no holding calls in the spring game and that’s a plus. Now comes the hard part: we have to wait more than four months to see the tackles in game situations to tell just how much progress Summers has been able to make with them. Trending: Treading water.

The 4th-ranked Gators (15-2, 6-0 ALC) captured the American Lacrosse Conference title outright Saturday afternoon in Evanston, Illinois, holding on to slip past host and #5 Northwestern (9-5, 3-3 ALC), 13-12. The Gators held an 11-5 lead with 17:25 remaining in the game and had to hold off a furious rally by the Wildcats, whose tying goal with 14 seconds remaining in the match was disallowed for a crease violation. Sammi Burgess scored four goals for Florida while Devon Schneider scored three and Shannon Gilroy and Nora Barry two each. The conference tournament is May 1-4 in Evanston. The Gators have the #1 seed and won’t have to play until the semifinals.

Florida solidified its lead in the SEC East by sweeping a double header from Georgia, winning the first game, 3-2, and then taking the nightcap, 8-1. The two wins give the 18th-ranked Gators (26-13, 11-6 SEC) a two-game lead over second place South Carolina, which split a doubleheader with Auburn Saturday. In game one, John Sternagel’s first career home run in the fifth inning gave the Gators a 3-2 lead and Bobby Poyner made it stand with four innings of hitless relief while striking out seven. Logan Shore (4-2) got the win. In game two, the Gators put it away with six runs in the fourth inning and it was cruise control from that point on. Aaron Rhodes gave up seven hits through 5-1/3 innings to get the win with relief from Kirby Snead and Dane Dunning. Harrison Bader drove in two with a run-scoring single in the third and a sacrifice fly in the fourth. Since starting the season at 6-6, the Gators are 20-7.

Fourth-seeded Florida (15-8) took out Vanderbilt, 4-2, to advance to the championship match in the Southeastern Conference Men’s Tennis Championships in Nashville … Florida’s #5 softball team (39-8, 10-7 SEC) got a welcome visit from Dr. Longball Saturday in College Station. Kirsti Merritt, Stephanie Toft, Lauren Haeger, Taylore Fuller and Katie Medina all hit homers as the Gators hammered #21 Texas A&M, 17-4, in a five-inning run rule game. The Gators scored two runs in the first and 11 in the second. Toft and Medina each drove in four runs while Fuller drove home three. Delanie Gourley got the win to improve to 13-1 for the season … Women’s golf improved two spots to #7 but remains 18 shots off the pace of Vanderbilt after two rounds of the SEC Women’s Golf Championships in Birmingham.

In Tuscaloosa, the Alabama quarterbacks stunk. That’s putting it mildly. Blake Sims, who spent the last three years as A.J. McCarron’s caddy threw two interceptions, completed less than 50% of his passes and averaged less than six yards per pass attempt. Cooper Bateman threw for two touchdowns but completed less than 50% of his passes and was sacked three times. What does this tell us? FSU transfer Jacob Coker, who arrives in Tuscaloosa after graduation day, will be THE man. Count on it. Attendance: 73,506, the lowest of any A-Day game since Nick Saban took over as head coach … At Auburn, the Blue team offense racked up 675 yards and beat the White team, 58-3. Unlike their cross-state counterparts in Tuscaloosa, there are no quarterback issues at Auburn where Nick Marshall threw for 236 yards and four touchdowns while Tre Mason’s replacement, Corey Grant, ran for 128 yards on five carries and Cameron Artis-Payne ran for 97 on 12. Attendance: 70,405.

Athlon Sports, whose magazine will hit the stands somewhere around Memorial Day weekend, came out with its ratings for the starting quarterbacks in the SEC. Number one – Auburn’s Nick Marshall – is no surprise but the rest of the list is interesting to say the least.

Most of the list is difficult to disagree with, but I would place Dak Prescott at #2 and Dylan Thompson at #3 with Wallace at #4 and Mauk at #5. I would swap spots for Driskel and Hutson Mason.

Today’s question comes from Don Allen, who asks, “There has been a lot of noise in the system regarding illegal recruiting and illegal benefits to players. We’ve all heard the stories of envelopes stuffed with cash doled out by boosters. How widespread do you think this activity is and is it really college football’s dirty secret? Finally, do you think  this kind of activity has a real influence on the success of college football programs by giving some programs an unfair advantage?”

I don’t think players getting cash is a dirty secret. It’s been going on for years. I think the method by which the players get the cash has become far more sophisticated and will continue to get more sophisticated, not to mention more difficult for the NCAA to police. In basketball, most of the cheating is done through the AAU coaches in collaboration with the shoe companies – “Have your shoe company donate X dollars to my travel budget for next year” … and the AAU coach gives money to the kid. It’s almost impossible to police. I hear football money is now going through the 7-on-7 programs. I think there are schools like Florida, which do an extraordinary job of policing the boosters, but do I think that something or someone hasn’t fallen through the cracks? I think it would be naïve not to think so. A friend of mine who is a former high school coach also tells me that there are other ways that money gets funneled to players such as car insurance mysteriously gets paid every month; gift card worth $100 for Dillard’s or Applebee’s shows up in the mail with no return address, etc. I also want to say that this does not necessarily happen at EVERY program but I think there are some with a history of working the gray areas and beyond who will always find ways to get money in the hands of players. I think the players network and know which schools specialize in hundred dollar handshakes and other methods of providing spending cash.

I recently discovered the singing duo called Johnnyswim, which is the husband-wife duo of Jacksonville native Abner Ramirez and Amanda Sudano, whose mother is 1970s disco diva Donna Summer. They write their own material and do everything from country to folk, blues, bluegrass and soul. I discovered them watching “Live from Daryl’s House” on Palladia TV and that got me searching YouTube for more of their music. This is “Heart Beats” from the album of the same name performed on Jay Leno last summer.