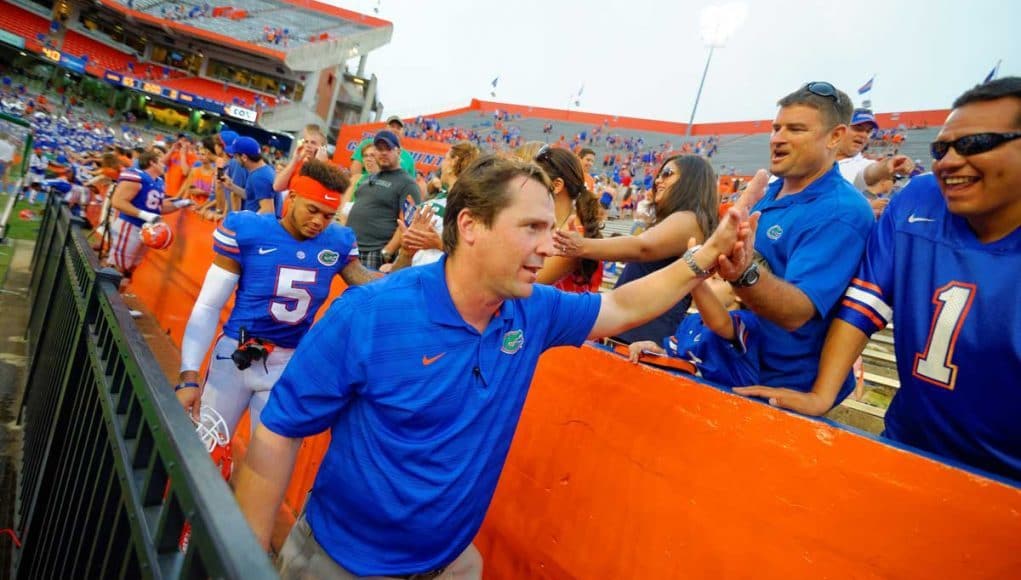 All is well in Gator Country this week as Gator Nation celebrates the ending of a 30-year aberration (a losing season for the Orange and Blue) with a sigh of relief and the giddy excitement of possibilities. The excitement of this season is heightened by the unusual circumstances surrounding it, circumstances that may be best encapsulated through seven particular frustrations attendant to the build-up of the 2014 college football season for Gator fans everywhere.

Although disappointed I wouldn’t be able to personally witness the debut of what promised to be a re-energized Gator offense, around 5:45 p.m. I settled in to a seat at the Buffalo Wild Wings in River City Marketplace on Jacksonville’s Northside near the Airport. The place was packed, and raucous. I thought to myself, “This is just right. Football time in F.L.A., Georgia-Clemson knocking heads on the big screen, West Virginia giving Bama a hard time (and the Bama QB looking decidedly pedestrian), Auburn and Arkansas doing battle on the Plains and the Hawgs were looking very competitive. And some other games that didn’t really hold my interest.

Perfect, I mean absolutely perfect appetizers for the main event awaiting at The Swamp.

Soon, however, everything started to go wrong. I had earlier checked WRUF Weather and saw this:

UPDATE: Chances for rain and possible lightning between 6 and 9pm in #Gainesville are about 40%. #inallkindsofweather pic.twitter.com/NMTDNcIzyY

As a slight weather nerd, I knew this was ominous. Sure enough, as 7 p.m. was approaching I could hear Mick Hubert saying something about the countdown clock for opening kickoff had stopped counting down. I seem to recall it was stuck at the 19 minute mark or something like that. This meant we were in a delay situation. All of the other games became far less interesting to me and a very real sense of frustration began settling in.

Soon after 7 p.m. I saw this tweet from WRUF:

Update: cell approaching #UF & #Gainesville now should pass through by approx 7:50. Lightning possible until then. pic.twitter.com/iydo8gSEmR

That pretty much sealed the deal for me, and the rest was history. I operated as a confused addict for the next seven days, waiting for my promised but delayed hit. Arrrrgggghhhh.

Will Muschamp, the head coach in waiting at Texas before he was hired here, was essentially on the Urban Meyer track in his early tenure at Florida but with a defensive focus (11-2 in year two, etc.). He remembered the rock ‘em, sock ‘em days of a rough and tough Gator defense getting standing ovations at Florida Field for repeated three-and-outs, etc. Floridians, however, like throwing the ball around. A cascading series of offensive misfires on coordinators and line coaches, combined with unprecedented injuries, created a severe misfit. Will got the message; enter Kurt Roper. Offensive frustration settled.

Frustration 3: Beasts of the East, Humbled

It’s true: it’s hard to be humble when you’re a Gator. When you’re the flagship program in an American mega-state and ultra-successful academically and athletically, humility is often your short-suit (any card players out there?). But we’ve been humbled, bigtime. You all know the story of the 4-8 season, the opposing fanbases laughing about Georgia Southern, the seven straight losses, etc. Hopefully, we’ve now had our requisite dose of humble pie and are done with it for quite some time.

It has been years since Gator Nation has had to endure the kind of erratic quarterback play we’ve recently witnessed. Some folks still insist Urban Meyer screwed up John Brantley (I have my doubts), some people still prefer Jacoby Brissett to Jeff Driskel (no, sir), and some think Tyler Murphy was given a raw deal (seriously). Opinions abound, and superior play has not. Gator Nation is (understandably) tired of it.

When your offensive coordinator and your offensive line coach succumb to the pressure of injuries, youth and who knows what else, production suffers. With the recent dominance of the Bama model, we know one approach that works. Muschamp got caught emulating it at the very moment when its kryptonite appeared on the scene. Not good for a coach in transition or a notoriously impatient fanbase.

Frustration 6: The Receivers and Tight Ends

When your offensive coordinator and your offensive line coach succumb to the pressure of injuries, youth and who knows what else, effective play by your tight ends and receivers is impossible. Thus, the perfect storm of 2013 that was the Florida Gator football season.

This last frustration, of course, isn’t really a frustration with the unit. It’s a frustration that much of the glory of having a championship-quality defensive unit was tantalizingly within reach in 2012 (ultimately failed by the red zone difficulties of our first-full-year starter at quarterback in the Florida-Georgia game) and then completely squandered in 2013 by the combination of a severely underperforming offensive unit and the decimation that results from an unbelievable rash of season-ending and season-interrupting injuries.

All of these frustrations, every single one of them, would be exorcised in the Eastern Michigan game. Finally, it was the weekend (the opening weekend) all over again and I was back to my regular thinking. No thanks to advance notice from Comcast, I was able to figure out that the Florida game would indeed be featured on my high definition SEC Network channel.

Yes, yes, yes I thought to myself – seven points for seven thoughts (starting QB, 3 primary RBs, 3 primary WRs). That would be my theme, my litmus test, for Kurt Roper and this new Gator offense. Like many Gators, I had confidence in the defense and knew that where we were thin, we had talented though inexperienced depth. I instinctively knew that a deeper defense with a better operating offense would categorically be a better defense. So I had no real worries there.

My worry? I was thinking about Number 6, Jeff Driskel, demonstrating a command presence out on Florida Field. I was also thinking about Numbers 21, Kelvin Taylor; 24, Matt Jones; and 33, Mack Brown running Eastern Michigan crazy out in that humid Florida heat. But like many Gators who have signed off on and believe in Jeff Driskel, I was most especially thinking about the three sets of three-deep wide receivers listed on our depth chart, a three-deep we desperately want to love. Among my seven thoughts, my focus for this game would be on the three starting wide receivers and their chemistry – or lack thereof – with Jeff Driskel.

Jeff Driskel? A whopping 45 attempted passes, with 31 completions with one touchdown and no interceptions. Take your pick on what was most important among those statistics (I’d say the combination of 45 passes and no interceptions – that was what Roper promised, and that is what Jeff delivered). Most intriguing for me, however, was the other quarterback that stepped on Florida Field. A Florida high school legend that won two straight state championships and one mythical national title. A man with a phenomenal pedigree but remarkably little Gator hoopla who stepped onto the hallowed ground of Florida Field at Ben Hill Griffin Stadium and showed not only The (much-celebrating) Swamp but one and all: I am neither a wildcat quarterback nor a package quarterback, I am an elite quarterback, a pass-first-run-second quarterback, and don’t you forget it.

Two passing attempts, two touchdowns, 148 yards – a feat which set Gators and Gator Haters everywhere buzzing all over the universe. Yes, the mustard and ketchup crowd are in denial but it isn’t fooling anyone. Yes, the Canes have shut the hell up and are in full fear that Dade County phenom with University of Miami ties is set to do his thing in Gainesville, F.L.A. Yes, my exuberance runneth over – but (until proven otherwise) I smell championships!

The upshot from the Eastern Michigan game? Incredible depth at running back was on glaring display. Superior play and effort at tight end and wide receiver was evident all day long. Effective offensive line play was at times jittery but excellent overall. The defense was ferocious, and the special teams play consistently good.

One historic season of injuries has completely confused many, including many within Gator Nation, regarding the genuine strengths of this team. To me, this season has the feel of Urban Meyer’s second season, when many in Tallahassee and elsewhere were openly joking about that new coach of ours, that fullback we had recruited named Tim Tebow that we mistakenly thought was a quarterback, that undersized and underachieving Carolinian pansy of a quarterback who was given the job over a deserving Ingle Martin and in no way, shape or form fit the gimmicky Urban Meyer offense.

That’s what this season feels like to me. It’s time to re-open that Florida Orange and Royal Blue can of Fightin’ Gator Kick-Azz. It’s time to let the Bull Gator eat! And we have the personnel and coaching staff to do just that.