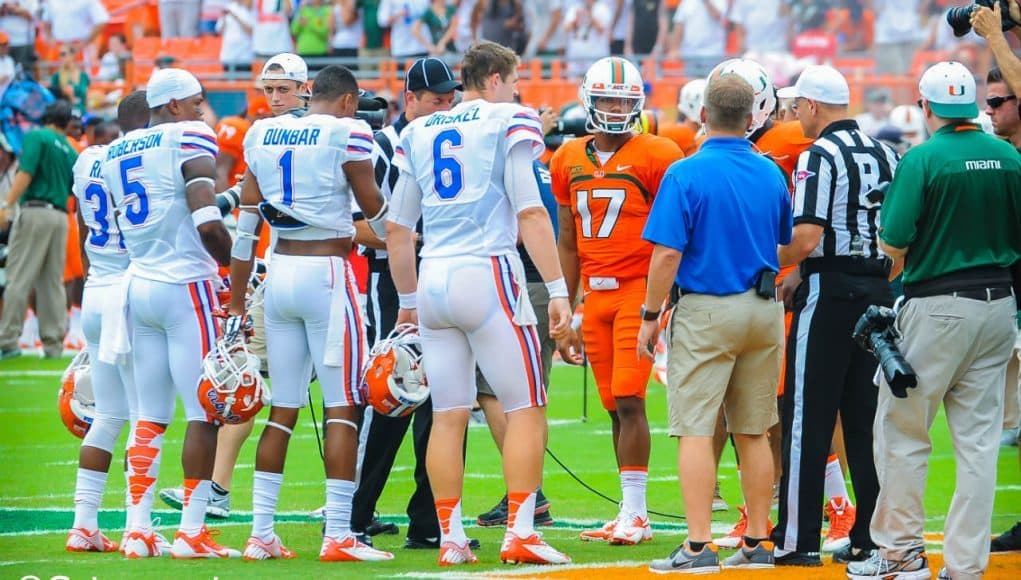 The Florida Gators and Miami Hurricanes are in plans to renew what was once a great yearly rivalry game, according to the Orlando Sentinel.

The Gators and Hurricanes have played 55 times since 1938 (Miami leads 29-26). The two were annual opponents from 1938-1987 but have played just six times (including two bowl games) since then. Of course, the two will meet to kick off the college football season this year in Orlando.

The Orlando Sentinel is reporting that the two schools are in discussions to renew that annual rivalry “in the near future.”

Stricklin has previously responded on twitter saying that it is difficult to schedule opponents for out of conference home-and-home games.

Hard to find a power 5 opponent available for H/H prior to 2025, but working on some neutral sites before then and H/Hs for later part of decade https://t.co/jBqIsMuqco

The Gators recently announced it’s 2020 schedule and the out of conference slate was criticized (Florida will play Eastern Washington, South Alabama, New Mexico State and FSU). That kind of schedule is something that Stricklin is trying to change though. The Gators opened the 2017 season in Dallas against Michigan. They’ll open up the 2019 season with Miami and they have announced home-and-home games with South Florida, Colorado and Texas in the years to come.

The addition of those games will make it challenging when looking to add a home-and-home with Miami. The Gators will play USF in Tampa in 2021 and then host the Bulls in 2022. Florida host Colorado in 2028 with a trip to Boulder in 2029. The Gators will host Texas in 2030 and take a trip to Austin in 2031.

That leaves, as the Orlando Sentinel pointed out in their report, a potential opening in 2023 and 2024 for a series.

Nick Saban and Greg Byrne (who is very close with Scott Stricklin) have gone on record stating they want more Power 5 games on their schedule.

There are more ways than ever to watch football games and the prices for tickets aren’t getting cheaper. Attendance numbers are down nationwide and it appears that the universities and shot callers are willing to try and schedule bigger name games rather than the traditional cupcakes in an effort to get fans back in the stands.