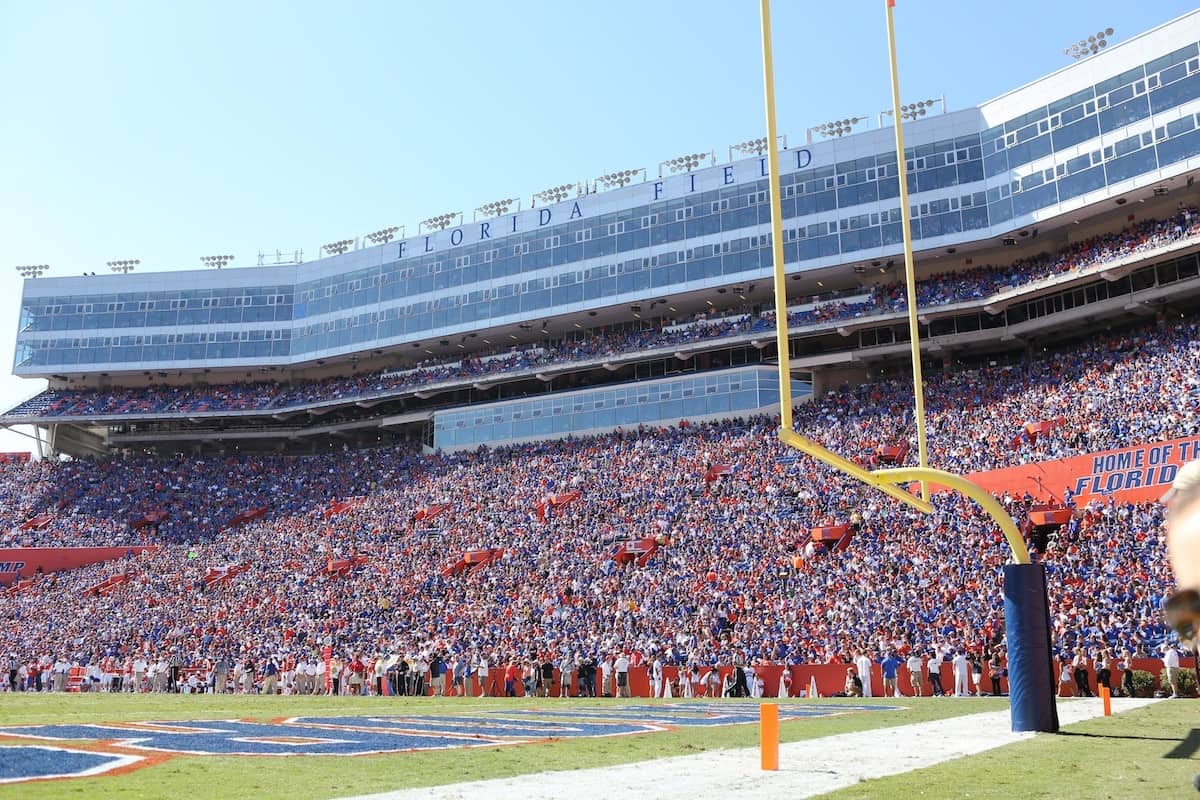 On a miserable, rainy afternoon on September 16, 1995, Lawrence Wright had one of those enough is enough moments. You know the kind. Everything is going wrong in too many directions and you have this epiphany that tells you that if you don’t do something about it, nobody will. Lawrence had his moment standing in the middle of Ben Hill Griffin Stadium about the time Florida’s defensive brain trust came to the conclusion that Peyton Manning was wearing the Gators out in the middle of the field. So, they changed defense and Lawrence had his enough is enough moment.

Joey is Joey Kent, now one of Lawrence Wright’s buddies, but at the time, a guy who was catching far too many passes against Florida’s ill-conceived defense through the first 25 minutes of the game. When the call came in from the sideline to alter the defense, Wright had what he calls his “No Fly Zone” back.

“I made up my mind that whoever came across the middle next, they were going to get hit and hit hard,” Wright said from his Miami home Saturday evening.

It was Joey Kent’s misfortune to be the first one to test the No Fly Zone. Kent broke free in the middle just after Manning escaped the Florida pass rush. Rolling to his left, Manning squared his shoulders to the line of scrimmage around the 21-yard line and flipped a pass in Kent’s direction up near the 45. Kent had started his route down the left hash, but when Manning broke containment in the pocket he separated from Fred Weary by turning to the middle of the field. For a scramble play, it couldn’t have been drawn up on paper any better except nobody – especially Joey Kent – saw the human missile on radar lock, bearing down at warp speed.

The ball arrived. So did Lawrence Wright.

It was as clean a hit as you’re ever going to see. Wright didn’t target the head, but went straight for a spot just above the solar plexus. There was less than a tenth of a second from the time the ball nestled in Kent’s hands before Mr. Wright came hurtling from his center field position.

The ball went flying and Kent crumpled to the turf. He writhed in pain for a few moments, then lay motionless, only the spit bubbles in the corners of his mouth an indicator that he was actually alive from one of the most vicious hits ever seen in The Swamp.

“I saw that ball come out like slow motion,” Wright recalled. “I saw Peyton step up from the rush and roll out from the pressure and I saw Joey cut up the field,” Wright recalls. “He was coming straight at me and he never saw me because he was watching the ball into his hands. As for me, I wasn’t going to go for an interception. I was going to hit him as hard as I could.

“While he was looking the ball in, I had a full running start and I just launched myself at him. He got the full force of everything I had and the ball went flying.”

It was ruled a fumble and the Gators recovered but on their first play, Danny Wuerffel fumbled and the Vols Raymond Austin scooped it up and ran for a touchdown to give Tennessee a 30-14 lead. But, it didn’t matter. The hit Lawrence Wright put on Joey Kent had already settled things.

Although they led by 16 points, on the Tennessee sideline there was fear. The Vols had been living in the middle of the field but after that hit, there wasn’t a receiver brave enough to venture into the No Fly Zone. Buoyed by the big play by Wright, Florida’s offense suddenly caught fired. Wuerffel suddenly couldn’t miss as the Gators steamrolled their way to 48 consecutive points.

“When I got up off the ground, the stadium was erupting,” Wright said. “It was so loud and it got electric. You could feel it that something was going to happen. They got nothing else the rest of the game. We annihilated their passing game and they couldn’t run the ball anymore. Danny just couldn’t miss and we scored like there wasn’t anyone on the field.”

The Gators won the game, 62-37, to go 4-0 on the season. They would go 11-0 in the regular season and win the SEC Championship Game before meeting up with that Nebraska juggernaut in the national championship game in the Fiesta Bowl.

None of that would have been possible without what is now referred to by Gator fans as “The Hit Heard ‘Round the World.” Without that hit to completely change the momentum of the game, the Gators probably would have lost and finished the season in the same Citrus Bowl that Steve Spurrier once referred to as the Winter Home of the Tennessee Vols.

“It changed the game … it changed the season and actually changed two seasons,” Wright said, adding almost sheepishly, “For some reason nobody wanted to throw the ball over the middle against us the rest of that year and in 1996 when we won the national championship. When you take the middle of the field away, it’s a lot easier to play defense.”

That’s what Wright did best. He took the middle of the field away.

“Think about this for a second,” he said. “I won the Jim Thorpe Award (for the nation’s best defensive back) in 1996 and I didn’t have an interception. How can that be? Well, if no one will throw the ball your way or if receivers are afraid to catch the ball over the middle because they know what’s coming that’s pretty good defense.”

“Yeah, you could say that,” Wright said. “I always wanted the other team to know that if you come in my part of the field you’re going to pay a severe price. You might catch the first one, but you’ll be looking for me the rest of the game and you might not catch another one. That’s why I called it my No Fly Zone.”

There was never a doubt that Lawrence Wright was going to be successful. As a small child, he was anointed in his Miami church to be a blessing to others, something that drives his every day activity.

“I wake up each day and I’m open to hearing what God has to say,” said Wright, a successful Miami entrepreneur with multiple successful businesses under his wing. “I listen for that still small voice telling me that I need to be a blessing to someone and when I hear that voice and see that need, I know that God wants me to do something that will make a difference in a life.”

Sometimes it’s giving someone down and out a new chance in life with a steady job and a paycheck. Sometimes it’s helping that lady who needs medicine for her child by telling the pharmacist to fill the prescriptions and send him the tab. Sometimes it’s a simple word of encouragement or praying over someone who needs encouraging.

“Life is so good when you make every day an opportunity to be a blessing to somebody,” Wright said. “Any success I have in life is because I listen to God’s calling every day. It’s a good life.”