At a high level, Dan Mullen’s offense is a spread-to-run scheme. He wants to run the ball, and he spreads out the defense to facilitate that running. Here are a couple of plays from Mississippi State’s game against Alabama from last year that illustrate the basic, bread-and-butter aspects of Mullen’s run game.

On this first play, there is no score late in the first quarter. It’s 2nd & 5 inside the opponent’s territory. In short, the offense can basically do whatever it wants. What it wants to do is run.

The Bulldogs start with three wide receivers, one on the short side and two on the field side, with a running back and a tight end with his hand in the dirt. Alabama is in a 3-3-5 nickel alignment with two deep safeties.

Nick Saban prefers to have his defense disguise as long as possible what it’s going to do a lot of the time. When the offense has spread the field this much, though, it has to give up on the disguise earlier so as not to give up any cheap yards. 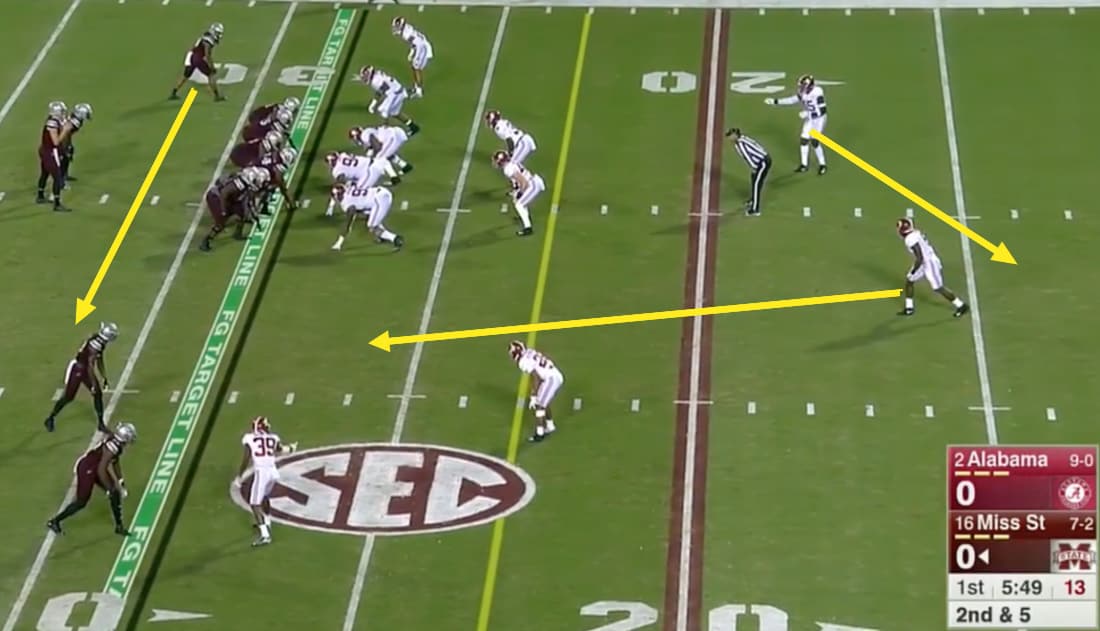 Mullen has the receiver on the short side, Deddrick Thomas, motion across the formation before the snap. That forces the defense to adjust, and it reveals a coverage with a single-high safety.

This is important information for Mullen and Nick Fitzgerald to know. It tells them that those two deep safeties aren’t going to be involved in run support. Hootie Jones has rotated down to help with the trips (three wide receivers) on the play side, while Ronnie Harrison is going to fade back to be the last line of defense.

The play isn’t going to take any chances with Jones getting involved, either. 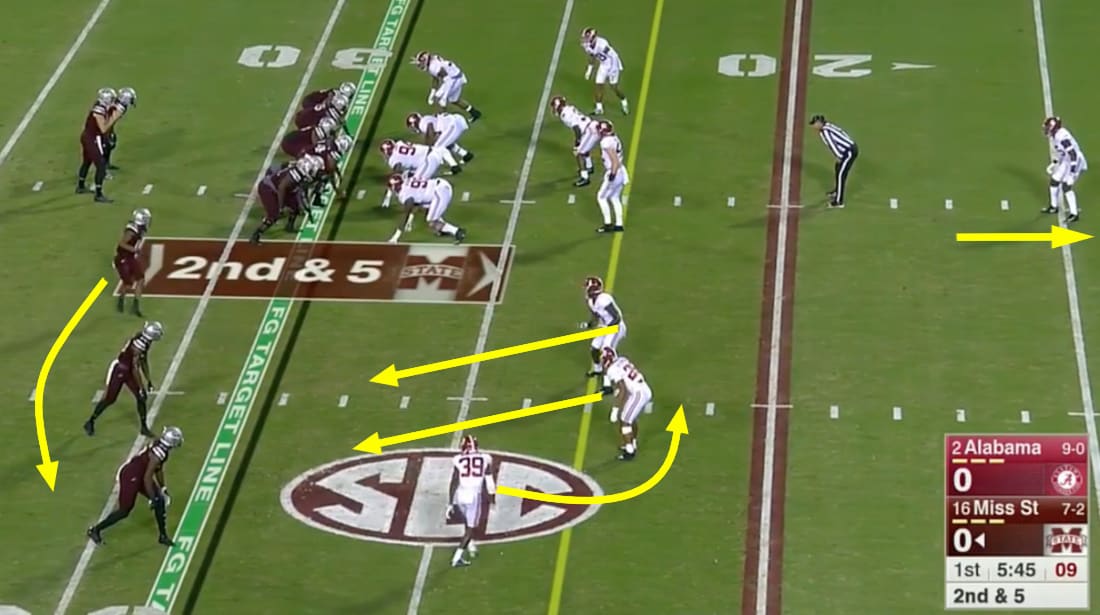 Because the single high safety is going to play center field, it means State has a numbers advantage in the box. There are eight Bulldogs — five linemen, tight end Farrod Green, running back Aeris Williams, and Fitzgerald — against seven Alabama players — three linemen, three linebackers, and a corner.

That numerical advantage is exactly what Mullen wants to see. Getting a numbers advantage at the point of attack is a major aim of the offense. When it can get that, it must exploit it.

Let’s zoom in on the box. This image is a bit cluttered, so let’s take it one piece at a time.

Fitzgerald will take the snap and put the ball in Williams’s belly. Williams will go towards the right side of the line while Fitzgerald will head left.

The tight end Green is on the left end of the line and will take the linebacker over there. The right tackle will take the defensive tackle Raekwon Davis on his end of the line. The right guard will head up to the second level to block the linebacker. The center gets the unenviable job of blocking Da’Ron Payne in the middle. The left guard will combo Payne briefly before releasing to the second level. The left tackle will push on the defensive end Isaiah Buggs to create a hole between him and the tight end.

The key defensive player here is Rashaan Evans. He’s the linebacker with the red arrow. Evans will shoot through the hole that the left tackle and tight end create to go after Fitzgerald. Therefore, it’s a handoff to Williams.

The play isn’t a big gainer because it’s really hard to block Davis and Payne one-on-one. The linemen get enough of them for Williams to keep his forward momentum and pick up four yards. It’s no breakaway touchdown, but it has set up 3rd & 1. It’s a success.

Here is the other play I wanted to highlight. It’s later on in the same drive, and the situation is 2nd & 7 in the red zone. Once again, the offense is in a place where it can either run or pass. Again, it wants to run.

MSU goes four wide with trips to the field side. Alabama is again in a 3-3-5. Here is the earliest frame of the wide shot before the play. 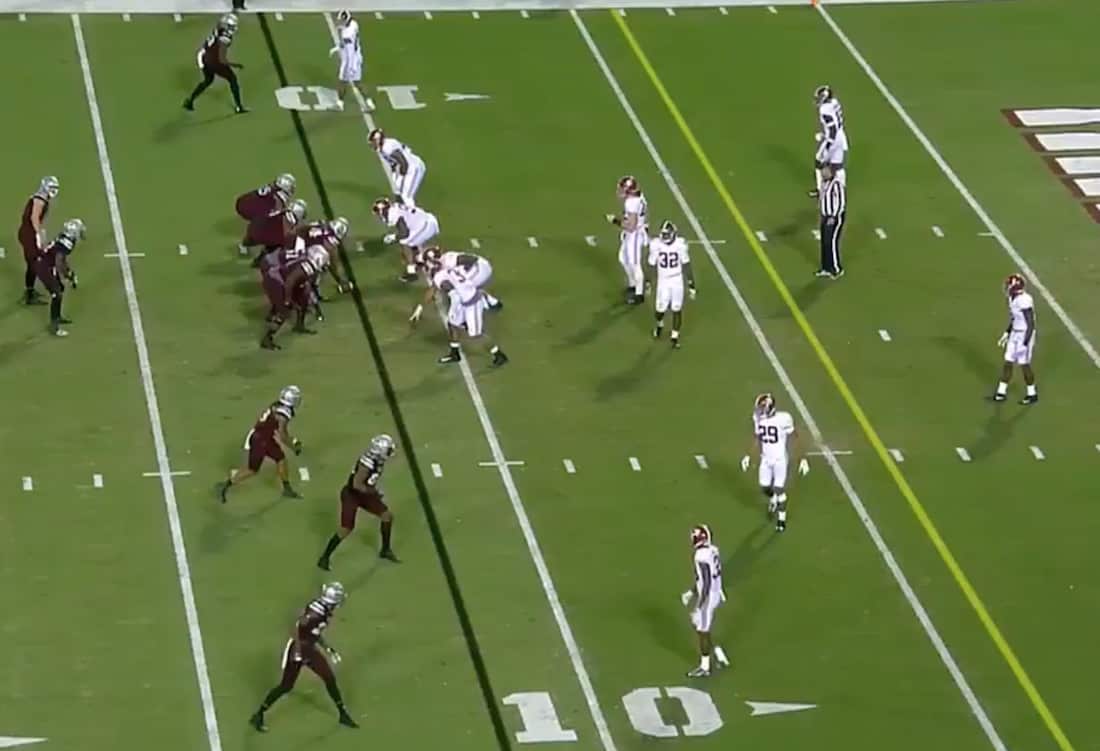 Bama is showing two deep safeties. But now look at the alignment just before the snap. 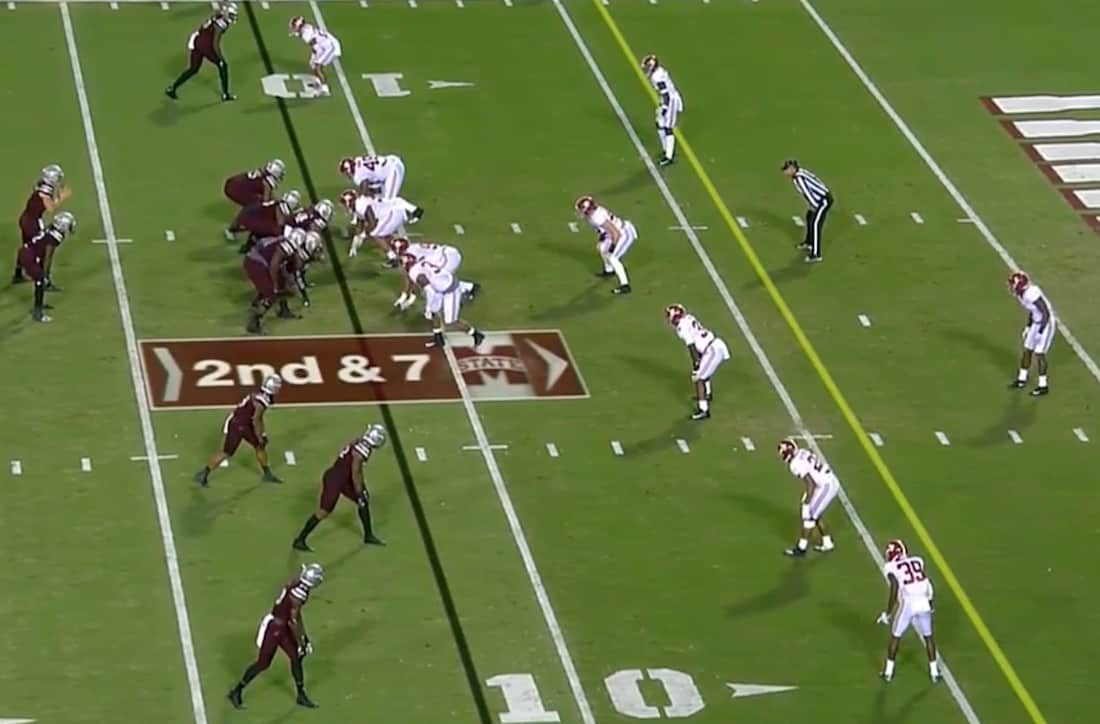 This time, Harrison has come up with Jones hanging back. It’s another single-high coverage. The disguise didn’t — and couldn’t — last long.

Bama again has three linemen with their hands on the ground and a stand-up linebacker on the edge. However, only one other linebacker is actually in the box, that being Keith Holcombe. Harrison on the short side and Evans on the field side are mirror images of each other, hanging out wide of the box to account for outside runs.

Evans also has to keep an eye on Thomas, who is in the slot to the right and will again run a fake bubble screen to the sideline. You’ll see on the video that Evans stands frozen for quite a while after the snap as he diagnoses where he needs to be.

Alabama has seven guys on run patrol: four defenders on the line, Holcombe, Harrison, and Evans. With a four-wide set and no tight end, MSU also has just seven: five linemen, Williams and Fitzgerald. To regain the numbers advantage, Mullen turns to the “option” part of the spread option.

Anfernee Jenkins, the linebacker on the right side of the offense’s line, will go unblocked. Fitzgerald will read him and see that he’s hanging back to account for a quarterback keeper. Therefore, he again hands it off.

MSU will also leave Evans unblocked, as Thomas in the slot is helping keep him out of the action. That means five offensive linemen are available to block five defenders: three linemen, Holcombe, and Harrison. If the blocking holds, Williams should be free to get to the second level with no defenders left to account for him.

The linemen do a great job at getting a hat on a hat. The left tackle, left guard, and right guard all block the guy in front of them. The right tackle pulls to the second level to take Holcombe. The center No. 74 is the key, double teaming Payne to set the left edge of the hole before releasing to block Harrison on the next level. Williams punches through the clearing and gets a nice block from the umpire to make it in the end zone.

These two plays are Mullen’s run attack in a nutshell from a philosophical standpoint. They’re not representative of everything, of course, but they show you why the two halves of the phrase “spread option” are important.

Spreading the field means that the defense cannot disguise what it’s doing for long and that there will be fewer defenders near the ball at any given time. The option part means that the offense gains numbers advantages through having an extra guy able to carry the ball (the quarterback) and, if it so chooses, by leaving a defender unblocked for the quarterback to read.

This is the basic philosophy of Mullen’s rushing attack in action. There will be time to get more detailed as the offseason goes along, but this is the starting point.