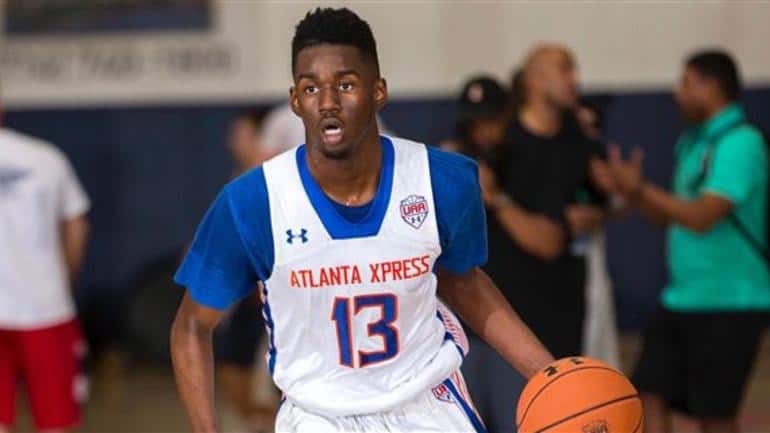 It’s hard to get a quality player as late as May or June for the upcoming season but some reports are saying the Gators might have an opportunity to land an unexpected gem them they thought they missed out on. Florida was in heavy pursuit of top-60 2018 recruit Khavon Moore and was listed in his final schools before the 6’8” Macon, Georgia product ultimately chose the Texas Tech Red Raiders. Formerly a 5-star top-25 player, Moore has dropped in his ranking but is still a fantastic player with a tremendous ceiling.

A big part of the reason he decided to choose TTU was his relationship with assistant coach Al Pinkins. With Pinkins now at Florida, there are some sources saying he might be thinking of a flip to the Gators. Relationships with the assistant coaches that recruited them are huge in a player’s college decision and there is word that Pinkins’ departure has left Moore with some doubts about his choice to play in Lubbock.

We all know the Gators are currently maxed out when it comes to scholarships with 13, but many reports are saying that Hudson is killing it in workouts with NBA teams and could definitely stay in the draft. With the graduate transfer pool evaporating quickly Moore could be an incredible late-spring get if Hudson were to leave.

To make him instantly eligible the Red Raiders would have to let him out of his letter of intent which in the past coaches have not been super willing to do, but we recently saw coach Gregg Marshall at Wichita State let Alex Lomax out of his letter of intent without a fight to sign with Memphis when Penny Hardaway was hired so we could be seeing a culture change here. If Texas Tech coach Chris Beard were to not allow Moore of his letter of intent it could force him to have to treat the move to the Gators as a true transfer, meaning he would have to sit out the 2018-19 season. Not a move I would expect Beard to make, but one that also wouldn’t be shocking and could be further salt in the wound after the Red Raiders dispatched the Gators from March’s NCAA Tournament.

Moore is currently recovering from a broken leg, a devastating injury that occurred in January and unceremoniously ended his high school career. The original timeline was for him to be ready to go in September, so the Red Raiders (or whoever he ends up playing for) could see him missing the first portion of the season if there are any setbacks with his recovery. I know Gators fans won’t like hearing about a player potentially missing time with an injury, but I assure you that getting Moore coming off a broken leg is a far, far better option than not having the scholarship filled if Hudson leaves.

6’8” and extremely versatile, Moore is the kind of player the Gators lacked last season and the kind of athlete Mike White has been targeting in future classes. Though his frame looks a lot sleeker than his 187 pound listing would suggest he is a plus defender who often takes on much smaller guards and uses his foot speed to stay in front of them and cut off penetration. Although you might expect him to play off of the ball with that size he actually played the point guard spot regularly for his high school team. I’m not sure if he’d ever be the primary ball handler in college but if the Gators got him he could bring something the team has sorely missed during the Mike White era which is a wing player who can create for his teammates. Also possessing the ability to shoot off the dribble he can create his own offense late in the shot clock with very few players in the world able to block his highly-released jumper.

Moore was a massive commitment for the Red Raiders. After fumbling around Big-12 mediocrity for the last decade this past season’s Elite Eight was a turning point for the franchise and securing Moore was considered to be some of the fruits of the successful season’s labor. Ranked in the top-40 at the time of his commitment, he was the team’s first top-100 commitment since D’walyn Roberts in 2007. Losing him would mean the Red Raider’s 2018 recruiting class would only consist of a 3-star guard in Kyler Edwards and a talented JUCO transfer in Deshawn Corprew.

Though Khavon Moore to the Gators is far from a sure thing this will definitely be a situation to watch for.